“THOUGHTFUL AND AFFECTING.  King Lear has lowered its voice, the better to be heard more clearly…Mr. Pennington’s King…punctuates the expected blasts of rage with a quieter, introspective insight that is more devastating…More than any Lear  I’ve seen this production gives the impression of talking to — rather than yelling at — its audience…Ms. Arbus is here to remind us just how much Lear is a story not only of dynasty but also of families.” – Ben Brantley, The New York Times

“A stark, supple staging with a good company headed by Michael Pennington, who is wonderfully subtle.” – Michael Sommers, NewJerseyNewsroom.com 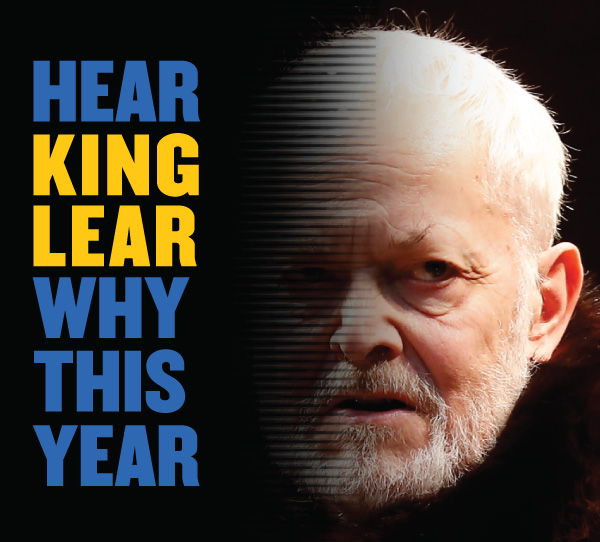 THIS YEAR: Six major productions of KING LEAR in London, Stratford, Canada and New York, What does it say about us culturally that there are so many?

TRAGEDY: About a King. Written for a King. But, what is a King? Five of the productions staged by men – only one by a woman: Arin Arbus directing the two-time Olivier Award nominee Michael Pennington. What will one of England’s greatest classical actors and this young American artist (“Most talented new director to emerge in 2009” New York Times) uncover in this story of the fracturing of the state, family and self?

HEAR and experience King Lear at the “sleek, new headquarters of a company that has devoted more than three decades to conjuring epic landscapes in small spaces.” (Ben Brantley, New York Times)

SCRIPPS Mainstage in a thrust configuration. Elegant, extraordinary acoustics and intimate–only 265 seats. “Bringing the performer and audience into an unfiltered, direct and honest relationship that Shakespeare’s work is best served by. It’s like the relationship in Shakespeare’s original theatres, the Globe, Curtain, Rose and Blackfriars” (Michael Boyd, former artistic director, Royal Shakespeare Company).

This production is sponsored by Deloitte.

Michael Pennington (Lear) has been acclaimed as Hamlet, Timon of Athens, Angelo and Berowne for the Royal Shakespeare Company; and as Coriolanus, Macbeth, Henry V and Richard II for The English Shakespeare Company, which he co-founded. He has played central roles in plays by authors such as Ibsen, Strindberg, Pinter, Stoppard and Mamet and last appeared in New York in Love Is My Sin, adapted and directed by Peter Brook and presented by TFANA.

Arin Arbus (Director) has staged at TFANA Shakespeare’s Othello, Measure for Measure, Macbeth, The Taming of the Shrew and Much Ado About Nothing. She recently staged Britten’s The Rape of Lucretia at Houston Grand Opera and last fall she directed La Traviata at The Lyric Opera of Chicago.