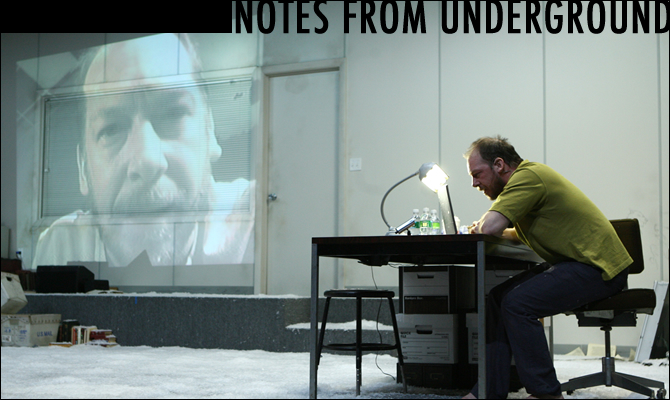 From the novella by Fyodor Dostoevsky
Based on a translation by Richard Pevear and Larissa Volokhonsky
Adapted by Bill Camp and Robert Woodruff
Directed by Robert Woodruff
Featuring Bill Camp, Michaël Attias and Merritt Janson

Theatre for a New Audience, in association with Baryshnikov Arts Center, presents the New York premiere of the Yale Repertory Theatre’s production of Notes from Underground, the revolutionary novella by Fyodor Dostoevsky adapted for the stage by OBIE Award-winning actor Bill Camp and internationally acclaimed director Robert Woodruff. “I am a sick man, I am a wicked man,” cries the Underground Man, one of modern literature’s first and most remarkable antiheros, created by the author of Crime and Punishment and The Brothers Karamazov.  A former government official who has defiantly withdrawn from a corrupt society, the Underground Man wages his own personal war on everything-and everyone-around him. Laugh-out-loud funny and terrifying, Notes from Underground is the passionate, obsessive and contradictory confession of a tormented soul.