“Wallace Shawn is at once the U.S.’s most profound and most overlooked playwright.”
David Hare, Playwright 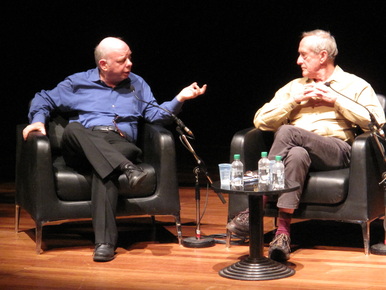 Our season’s climax will be a thrilling co-production with The Public Theater of The Wallace Shawn-André Gregory Project, a celebration of a remarkable theatrical collaboration. Wallace Shawn is one of America’s most significant playwrights, long overdue for a major retrospective. André Gregory, his My Dinner With André co-star, has been directing Shawn’s plays for forty years, and here he directs his two most recent plays: the first New York revival of the acclaimed masterwork The Designated Mourner and the American premiere of the profoundly provocative Grasses of a Thousand Colors. Shawn is a multifaceted figure: an internationally famous character actor as well as an incomparably courageous playwright whom critics have placed in the first rank of contemporary dramatists. Gregory is the acclaimed director who has brought his most challenging works to fruition, including Our Late Night, Wallace Shawn’s first play in New York City, which was presented at The Public Theater in 1975.

Shawn’s theatrical vision is bleakly hilarious, intensely passionate, and utterly original. He gestates his plays over many years, often builds them around demanding monologues, and (with Gregory) envisions performances that approach the intimacy of film. The works are sexy and morbid, acute and loquacious, realistic and fantastic in equal measure, and they invariably expand in scale, coalescing into sweeping visions of human folly, compromise and tragic self-destruction.

For an interview with Wallace Shawn on MSNBC’s “Up With Chris Hayes,” CLICK HERE

TICKETS: CLICK HERE for tickets to THE DESIGNATED MOURNER and GRASSES OF A THOUSAND COLORS.

$20 RUSH TICKETS — ON THE DAY OF EACH PERFORMANCE
Subject to availability, $20 rush tickets for Grasses of a Thousand Colors are available at the Taub Box Office at The Public Theater beginning at noon for that day’s matinee performance and 6pm for that day’s evening performance. Limit two tickets per person. Cash only.