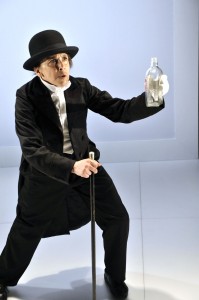 Kafka did not write “Report for an Academy” for the stage. It first appeared in Martin Buber’s journal Der Jude (The Jew) in 1917 as one of two “animal tales” and shortly thereafter in the collection of stories entitled “A Country Doctor.” But ever since his encounter with the rag-tag troupe of Yiddish actors who performed in Prague in 1910-11, Kafka was fascinated by the potential of drama for his prose narratives. Indeed, scholars have argued that his breakthrough as a writer with stories like “The Judgment” and “The Metamorphosis” (both written in 1912) was facilitated by his experience of the immediacy and plasticity of these living, speaking bodies directly before the audience. With their vivid use of dialogue, unity of place and action, Kafka’s early stories hew to Aristotle’s definition of drama and virtually invite staged readings and performances, despite the obvious challenges presented by their less than (or more than) human protagonists. Mikhail Baryshnikov, the guiding spirit behind the alternative theatrical spaces in which Kafka’s Monkey is taking place, famously turned himself into Gregor Samsa, the “monster bug” in “The Metamorphosis,” for a production on Broadway.

The connection to the Yiddish theater and Buber’s journal suggests a Jewish optic for understanding Red Peter’s transformation from ape into near-human. Kafka’s generation of German-speaking Jews came of age with the appalling spectacle of a failed assimilation. Instead of becoming “good Germans on the street” while retaining their Jewish faith at home, as the Enlightenment philosopher Moses Mendelssohn had urged, many of the Jews who were emancipated during the nineteenth century in Germany and the Austro-Hungarian empire (of which Prague was a part until 1918) had relinquished all but the external trappings of their Judaism. But they remained at the margin of German society, rejected and derided not only as Jews who would never be “truly German,” but also as traitors to their own tradition. The metaphor of the “apes of German gentiles” to disparage the assimilationist aspirations of the newly rich Jewish bourgeoisie was a common one in Kafka’s time, in Jewish as well as anti-Semitic caricatures. (The movie Cabaret uses the idea when the emcee sings a love song to a female chimpanzee, closing with a broad wink to the audience and the words “If you could see her through my eyes / She wouldn’t look Jewish at all.”)

Kafka himself bitterly rued the “nothingness” of real belief that his assimilating parents set as an example, and his enthusiasm for the Eastern European, Yiddish-speaking actors, whose spontaneous and exuberant Jewishness they did not try to hide, remained for him a shining, if painful reminder of his own all-too-rational, repressed and stilted Judaism. Yet however attracted he was to these free- spirits, with their zany, melodramatic skits performed in nightclubs and cafes and vaudeville theaters (the “variety theaters” where Red Peter also performs), Kafka was not an Eastern Jew and could never become one. He remained perpetually, self-consciously in between. Again and again he described himself as a Jew with animal metaphors, even those that were used by anti-Semites such as cockroaches and mice, to capture this state of being out of place. It is at once a curse and a refuge.

Yet Kafka’s stories are never straightforward satires or allegories. Red Peter’s capture and domestication can also be seen as a deeply ironic meditation on the slave trade between Africa and the New World (Red Peter comes from the “Gold Coast”) or, closer to home, on the European anthropologists and showmen who staged African village life for paying European audiences, complete with “authentic” African natives in appropriate costume. These “Voelkerschaus,” set up at trade exhibitions and fairs in Vienna, Berlin and Paris, gave Europeans the sensation of witnessing the exotic otherness of real savages, whose few words of broken German or French brought them nearer to civilization even as they confirmed their sub-human status. In Kafka’s first novel, set in a futuristic America, the hero changes his name to “Negro.”

Kafka’s Red Peter speaks his captors’ language perfectly of course, and he has a flair for figurative speech and ironic tone that he almost, but not quite, controls. His dilemma is to have achieved the education level of an “average European” while remaining stuck in an ape’s body–an excruciating, marginalizing condition of in-between-ness that characterizes Kafka’s greatest animal protagonists, from Gregor Samsa to the unnamed, mole-like creature in “The Burrow” or Josephine the singing mouse in his very last story. And like many of these animal riddles, “Report for an Academy” is merciless in depicting what it means to be human. Consider the transformative moment when Red Peter learns to speak, which begins when he picks up a bottle of schnapps, theatrically uncorks it and chugs down its contents in front of the sailors assembled around his cage, and then utters a jaunty “Hallo!” Never did the education level of an “average European” seem like such a pitiful accomplishment. But such is Red Peter’s entry into the exalted ranks of the speaking human. The irony of using the civilized European, whose ‘animal’ instincts are unleashed by alcohol, as the model for an ape’s elevation into human status, is profound and without end, like the distorted images in a hall of mirrors.

But perhaps we don’t need to understand “Report for an Academy” as an allegory of anything at all. Perhaps Kafka simply wants us to think about the category of the human through this no-longer animal and not-quite human protagonist. But here again we come up with a riddle rather than an answer. For one of the striking things about this story is that there are no pure animals with which to measure Red Peter’s accomplishments. His own animal condition lies behind the rifle shot that wounded him and the language he has learned to speak in order to survive, a vanished utopia to which he can never return. The half-trained female chimpanzee with which Red Peter entertains himself in the evening is no closer to pure animality for being less well educated; indeed, he recognizes the broken, crazed look in her eyes all too well. Nor do we ever see a “pure,” civilized human. The hunters and sailors who bring Red Peter in from the wild are themselves brutes, and the learned members of the academy who listen to his report never make an appearance. And so the question of genre—is it a story or a play?—turns out to be a philosophical statement about the performative nature of humanity itself. In Kafka’s world we are always playing at being human, always caught in between.

Kafka was not an Eastern Jew and could never become one. He remained perpetually, self-consciously in between.

MARK M. ANDERSON is the author or editor of two books about Kafka: Kafka’s Clothes: Ornament and Aestheticism in the Habsburg Fin de Siecle, and Reading Kafka: Prague, Politics and the Fin de Siecle. He teaches German and Comparative Literature at Columbia University and writes widely on European literary modernism, German-Jewish culture, and contemporary German and Austrian literature.