“[A] fine and sensitive production.” - The New York Times 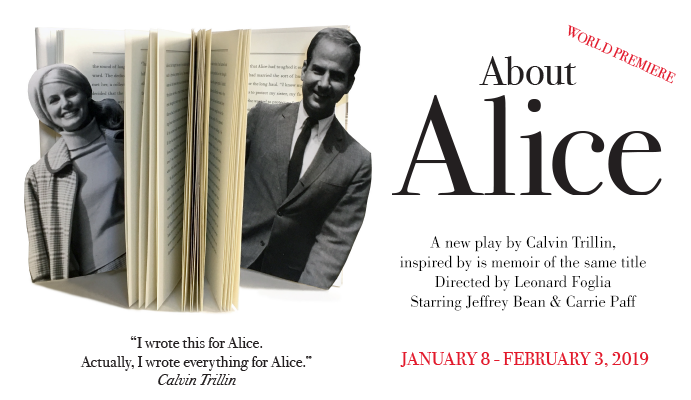 A new two-character play inspired by Calvin Trillin’s memoir of the same title. Running time is 75 minutes with no intermission.

“Maybe there was something going on somewhere I didn’t know about, but I grew up thinking married people loved each other.” –Read Rebecca Traister’s interview with Calvin Trillin in The Cut.

“You have to write about what you know.” –Listen to Calvin Trillin on The New Yorker Radio Hour with David Remnick.

“About Alice is an efflorescence of grace in a world that very much needs it.” –Lighting and Sound America

To read more about the show in the news here.

From condolence letters he received, Trillin felt readers didn’t know Alice beyond a “sort of an admirable sitcom character” that he created in his books and magazine pieces. Four years after her death, New Yorker editor David Remnick suggested that Trillin consider writing about Alice.   In 2006, New Yorker published Trillin’s essay “Alice, Off the Page: Expanding on–or maybe correcting–some of the things I wrote about my wife.” The 2007 memoir About Alice developed from the shorter New Yorker essay.

Rather than memorializing his grief, Trillin celebrates their New York romance, 36-year marriage, family, and the real Alice. Reviewing the memoir, Peter Stevenson (The New York Times) wrote, “Sometimes we come across a piece of first person writing that shocks us back into a restorative innocence vis-à-vis the human heart.”

Though Alice never smoked, at age 38 she discovered she had lung cancer. Against terrifying odds, Alice survived for 25 years.

The play begins with Calvin observing,

“There was one condolence letter that made me laugh. Naturally, a lot of them made me cry. Some of the ones that made me cry, oddly enough, were from people who had never met Alice. They had become familiar with her as a character in books and magazine pieces I’d written…Virtually all those letters began in the same way, with a phrase like ‘Even though I never really knew Alice… I was certain of what Alice’s response would have been.”

Alice, no longer a subject as in the memoir, and now present in Calvin’s imagination, replies, “They’re right about that. They never knew me.”

The production will be directed by Leonard Foglia (Anna Deavere Smith’s Notes From the Field).

Alice Stewart Trillin (1938 – 2001) was a remarkable educator, author, film producer, activist and long-time muse of her husband, Calvin Trillin, whom she married in 1965.

She attended public schools, then earned a B.A. from Wellesley College and an M.A. from Yale in English Literature. She taught at Hofstra, the City University of New York, and New York Medical College. Her work on curriculum design led to consultations for the Corporate Commission on Educational Technology, a Presidential task force, and WNET-Thirteen. In 1981, she co-founded Learning Designs, a production company of award-winning children’s television.

In 1976, a diagnosis of lung cancer led to another career: writing about being a cancer patient in what she called “The Land of the Sick.” In 1981, she published an article in The New England Journal of Medicine, ”Of Dragons and Garden Peas: A Cancer Patient Talks to Doctors.” Her pieces were also published in The Nation and Confrontation. A letter she wrote to a friend’s child who was battling cancer became an illustrated book, Dear Bruno. Her 1987 testimony before the New York City Council became a New York Times Op-Ed piece supporting a ban on smoking in public places. In 2001, eight months before her death due to complications from lung cancer, The New Yorker published “Betting Your Life,” her essay exploring the choices facing cancer patients. See The New York Times obituary here.

Calvin Trillin is an American journalist, humorist, food writer, poet, memoirist, and novelist. He began his career as a journalist in the fall of 1960, spending a year in the Atlanta bureau of Time covering the civil rights struggle in the South and then moving to Time in New York. In 1963, he joined The New Yorker as a staff writer. His New Yorker article on the desegregation of the University of Georgia was published as his first book, An Education in Georgia. From 1967 to 1982, he wrote a series called U.S. Journal in The New Yorker — a 3,000-word reporting piece from somewhere in America every three weeks. He has published thirty one books, ranging from comic novels (Tepper Isn’t Going Out) to political verse (Obliviously On He Sails) to true crime (Killings). Alice Trillin appears in some of Trillin’s lighter books, such as Family Man, and so do their daughters, Abigail and Sarah. An anthology of his humorous pieces, Quite Enough of Calvin Trillin: Forty Years of Funny Stuff, was awarded the Thurber Prize for American Humor in 2012. He is a member of the American Academy of Arts and Letters. The American Place Theatre, as part of its American Humorists Series, presented one-man shows by Mr. Trilliin twice – Calvin Trillin’s Uncle Sam in 1988 and Words, No Music in 1990. About Alice is his first full length play.

Leonard Foglia is a theater and opera director as well as librettist. Broadway includes Master Class, On Golden Pond, Thurgood, The Gin Game. Off Broadway: Anna Deavere Smith’s Notes From The Field and Let Me Down Easy, Opera: Moby Dick, Everest, Cold Mountain, The End of the Affair, Three Decembers, It’s a Wonderful Life, His production of Dead Man Walking was produced by New York City Opera.   As a librettist, he wrote (and directed) El Pasado Nunca Se Termina/The Past Is Never Finished and Cruzar la Cara de la Luna/To Cross the Face of the Moon both with composer José “Pepe” Martínez and A Coffin in Egypt with composer Ricky Ian Gordon.

Join us for free post-show conversations with artists and scholars after the following performances:

—
Generous in-kind support for About Alice provided by WorldStage.

Theatre for a New Audience wishes to express its appreciation to TDF for its support of About Alice.