“And Look Another Way” — Authors and Professors Scott Newstok, James Shapiro and Emma Smith in Conversation about Shakespeare for our World

An offering of TFANA Talks
Free and live-streamed with Q&A moderated by Artistic Director Jeffrey Horowitz
Saturday, May 30 at 2:00–3:15PM EDT

This event has passed.

CLICK HERE TO SEE THE VIDEO RECORDING OF THE TALK.
“And Look Another Way” is a line from Shakespeare’s Sonnet 7. The authors and professors, Scott Newstok, Professor of English, founding director, Pearce Shakespeare Endowment at Rhodes College, Memphis, Tennessee; James Shapiro, Larry Miller Professor of English and Comparative Literature at Columbia University, New York City; and Emma Smith, Professor of Shakespeare Studies at Oxford University, Oxford, England all have unique, lively perspectives about Shakespeare for our world. They will come together for a 45 minute free and live-streamed conversation moderated by TFANA Founding Artistic Director Jeffrey Horowitz followed by a 30-minute public Q&A.
The authors will also discuss their acclaimed recent books: Newstok’s How to Think like Shakespeare, Shapiro’s Shakespeare in a Divided America, and Smith’s This Is Shakespeare. The titles are available for online purchase via TFANA’s official bookseller, Greenlight Bookstore, here.
The concept and lineup for the May 30 TFANA Talk were proposed by Ayanna Thompson, director of the Arizona Center for Medieval & Renaissance Studies at Arizona State University. Thompson, the 2018-19 President of the Shakespeare Association of America, is the current Chair of TFANA’s Council of Scholars.
For Saturday’s conversation, Thompson says, “Shakespeare seems even more relevant now that we are living through a global pandemic. After all, he lived and wrote during one in the renaissance—the plague. His works are a reminder that beauty can grow even under the harshest circumstances.” About the event lineup, Thompson adds, “It is rare to have new books by three of the leading Shakespeare scholars in the world come out at the same time. Scott Newstok, James Shapiro, and Emma Smith represent the best of the best in Shakespeare studies. Their books will be studied for years to come.”

Greenlight Bookstore is proud to be the official bookseller for TFANA. To purchase the below books, click here.

ABOUT THE AUTHORS AND BOOKS 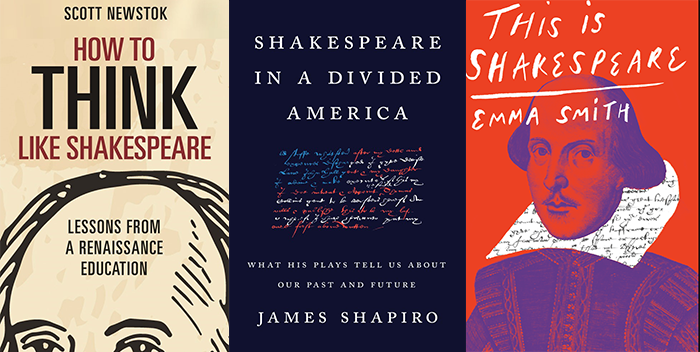 Scott Newstok is professor of English and founding director of the Pearce Shakespeare Endowment at Rhodes College. A parent and an award-winning teacher, he is the author of Quoting Death in Early Modern England and the editor of several other books. He lives in Memphis, Tennessee.

“Scott Newstok’s ‘How to Think like Shakespeare’ is something to treasure. The book lays out a case for Shakespeare’s vital connection to the lives we live today, opening the door to new ways of thinking and experiencing the world, which are essential to a life well lived.” — Michael Witmore, director of the Folger Shakespeare Library

How to Think like Shakespeare offers an enlightening and entertaining guide to the craft of thought — one that demonstrates what we’ve lost in education today, and how we might begin to recover it. In fourteen brief, lively chapters that draw from Shakespeare’s world and works, and from other writers past and present, Scott Newstok distills vital habits of mind that can help you think more deeply, write more effectively, and learn more joyfully, in school or beyond.

“Among all the fine words currently being spilled examining the American mess, James Shapiro has outshone many of our best political pundits with this superb contribution to the discourse. He upped the wattage simply by bouncing his spotlight off a playwright 400 years dead who yet again turns out to be, somehow, us.”  –  David Ives, The New York Times

Shakespeare in a Divided America shows that no writer has been more closely embraced by Americans, or has shed more light on the hot-button issues in our history. Indeed, it is by better understanding Shakespeare’s role in American life that we might begin to mend our bitterly divided land.

Emma Smith is professor of Shakespeare Studies at Oxford University. She has published widely on Shakespeare and other early dramatists. She lives in Oxford, England.

“A Shakespeare scholar’s fun, insightful and profoundly approachable study of 20 of his plays is perhaps the finest critique of his work to date” — The Guardian

This Is Shakespeare is an electrifying new study that investigates the challenges of the Bard’s inconsistencies and flaws, and focuses on revealing, not resolving, the ambiguities of the plays and their changing topicality.