“★★★★ A resonant parable of greed and inequality in our time.” - Financial Times

“Simon Godwin’s production should become the gold standard for the rarely performed play, a penetrating and very funny evisceration of greed and true friendship. ” - This Week in NY 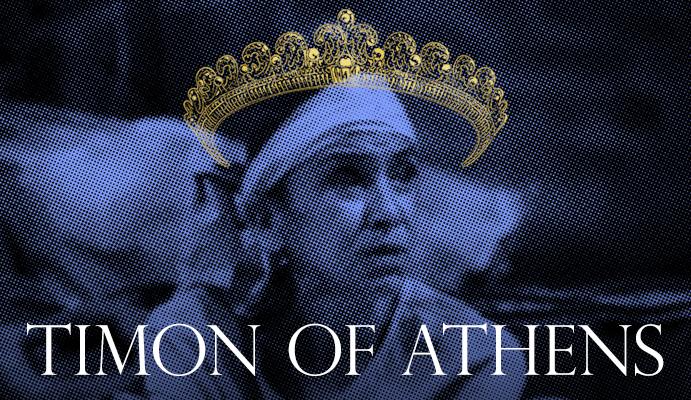 Kathryn Hunter, the internationally recognized Olivier Award winner, plays the role of Timon re-gendered as female. Celebrated as “astonishing,” her performance was first seen in a 2018 production at the Royal Shakespeare Company, directed by Simon Godwin. Ms. Hunter, memorable as Puck in TFANA’s A Midsummer Night’s Dream directed by Julie Taymor, has also been acclaimed as King Lear, Juliet, Cleopatra, and Richard III.

Simon Godwin “combines a contemporary eye with a fastidious ear for Shakespeare’s language” (The Guardian). He previously staged Measure for Measure for TFANA and now re-imagines his animated and vibrant production of Timon of Athens with an American company led by Kathryn Hunter. Mr. Godwin recently directed Antony and Cleopatra and Twelfth Night (National Theatre), and just succeeded Michael Kahn as artistic director of Shakespeare Theatre Company in Washington, D.C.

Timon of Athens is a play for our times.  Hilarious, satiric, and deeply moving, the play explores ingratitude, wealth, and what determines self-worth. Timon lives in a world of opulence, throwing wild parties and lavishing gifts on her friends. But, when Timon suddenly loses her fortune, almost everyone abandons her. Timon retreats to a forest, exchanging luxurious gowns for sackcloth, in a powerful journey of self-discovery.

Run time: 2 hours and 30 minutes with one intermission.

Timon of Athens is a co-production of Theatre for a New Audience and Shakespeare Theatre Company in association with the Royal Shakespeare Company.

Simon Godwin directed the premiere of this version of Timon of Athens was first produced by the Royal Shakespeare Company Swan Theatre, Stratford Upon Avon, United Kingdom, Opening December 14, 2018.