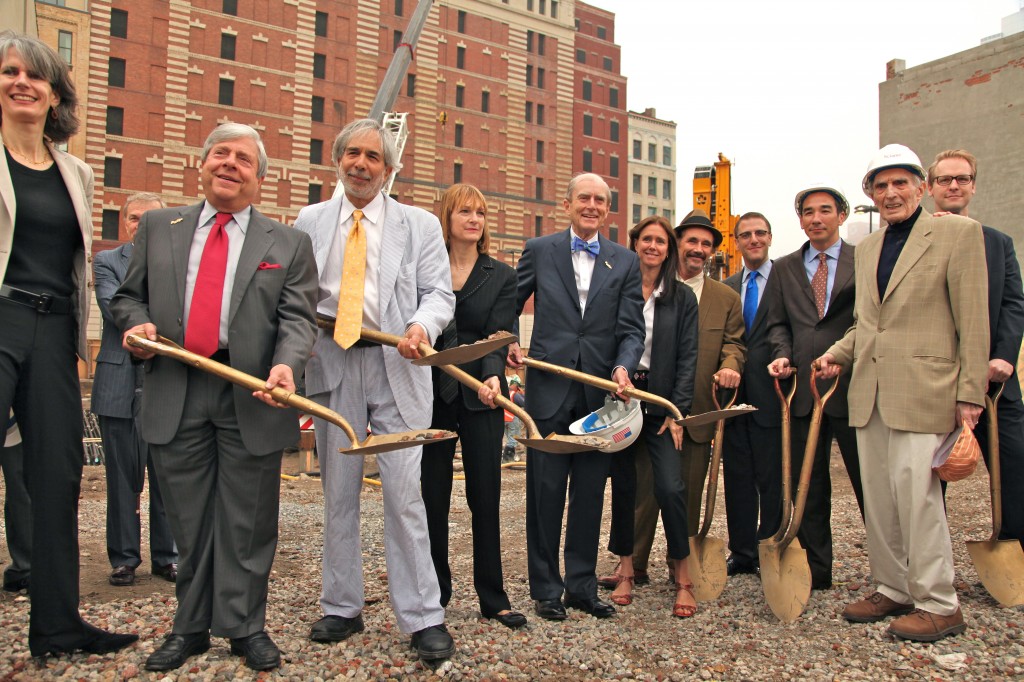 On June 24th, Theatre for a New Audience had its official Groundbreaking and Design Unveiling Celebration!
Founding Artistic Director Jeffrey Horowitz’s vision of a destination theatre for Shakespeare and classic drama is finally coming true in Downtown Brooklyn’s BAM Cultural District. Construction began in April of this year, and completion is expected in April 2013.

The day started on the busy construction site. City officials, Theatre Board Members and leadership, and a few special guests donned hard hats and scooped gravel with golden shovels to mark the occasion. The group then joined the more than 250 donors, artists and friends who have supported and worked with Theatre for a New Audience over its 32-year history for a celebratory ceremony at the BAM Lepercq Space.

In addition, Jeffrey Horowitz spoke eloquently about the Theatre’s history, its journey to groundbreaking, and its future. Joined by First Deputy Mayor Harris and Brooklyn Borough President Markowitz, he unveiled models and final renderings of the soon-to-be Theatre. Finally, he introduced director/designer Julie Taymor, who directed her first Shakespeare play with the Theatre in 1986, and Tony Award-winning actor Mark Rylance, whose U.S. acting debut was with the Theatre in 1993. Both spoke to the Theatre’s commitment to artists—particularly to emerging artists, which they both were when they first worked with the Theatre.

Excitingly, Julie Taymor announced from the podium that she would direct the Theatre’s inaugural production in its new home in 2013. This will be the fifth production that Taymor has directed for Theatre for a New Audience in her 27-year association with the Theatre.

Board Member Bob Schaffner remarked, “To hear Mark Rylance speak from the prologue of Henry V about the magic of the theater was inspiring. It was a magnificent taste of what is ahead for TFANA in our new theater.” Amy Nieporent, a member of Brooklyn’s Dreamers, the Theatre’s young patron’s group, said, “It was very moving to hear theatrical greats Julie Taymor and Mark Rylance credit TFANA with being instrumental in launching their careers in New York when they were emerging artists. I’m thrilled that my Brooklyn neighbors will soon experience the best Shakespeare productions in NYC right in our own backyard.”

For a photos galleries and video from the celebration, or to see the final renderings of our new home, please click here.

We look forward to keeping you posted on the progress of our new home. Please check back often for updates.

Categories: All News, Organizational News, Our First Home, TFANA in the News