The Spotlight’s on… Mark Rylance 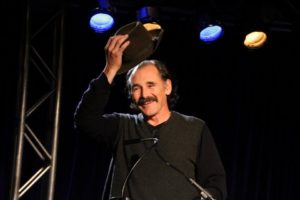 Mark Rylance is one of the world’s greatest classical actors. Born in Kent, England, Rylance spent his early years in Connecticut and later Wisconsin, where his father was headmaster at a preparatory school. Rylance later attended the school, where he began acting in their Shakespeare festival. He then won a scholarship the Royal Academy of Dramatic Arts (RADA), one of London’s most prestigious acting schools. Following his training there, Rylance received his first job at the Glasgow Citizens Theatre in 1980.

During his career Mark has acted in 48 productions of plays by Shakespeare and his contemporaries, and has performed the role of Hamlet for more than 400 performances. Among many awards, he was the recipient of the 2008 Tony Award for Best Actor for Boeing-Boeing, a role he originated in London and brought to Broadway. His film and television work includes The Government Inspector, in which he won a BAFTA award for Best Actor, and most recently, The Other Boleyn Girl.

In 1996, Rylance was appointed Artistic Director of Shakespeare’s Globe Theatre, a post he held until 2006. He is currently an Associate Artist of the Royal Shakespeare Company.

Rylance has a long association with Theatre for a New Audience, beginning in 1993 when he played King Henry in the Theatre’s production of Henry V. The next year he directed As You Like It, and in 1997 he appeared in Two Gentlemen of Verona. When the Theatre presented he Globe’s production of Measure for Measure at St. Ann’s Warehouse in Brooklyn in 2006, he played the role of the Duke.

Members of Rylance’s family also play roles with the Theatre: wife Claire Van Kampen has composed music for two of our productions, stepdaughter Juliet Rylance made her New York stage debut this spring in Othello, and son-in-law Christian Camargo appeared as the title roles in Hamlet and Coriolanus.