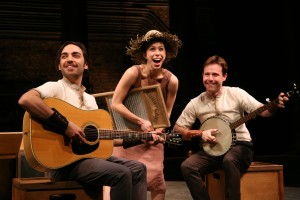 We are delighted that New York Magazine recognized Fiasco Theater’s Cymbeline on its annual Top Ten Theater Productions list in 2011. Chosen for “its custom tunes, delightful cast, and joyfully resourceful stage design,” the widely-acclaimed production closed its 20-week run – including a 2-week extension – at The Barrow Street Theater on Sunday, January 15. Click here for photos, reviews, and perspectives on this wonderful production. For those of you who miss the production’s beguiling music, Fiasco Theater has released a recording of music from Cymbeline and their 2010 production of Twelfth Night. The album, entitled Fear No More, is available for purchase on iTunes and CDBaby.com.