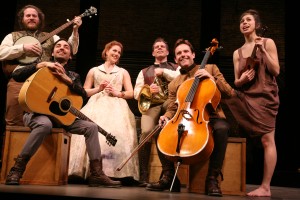 NEW YORK, Dec. 19 – CYMBELINE IS EXTENDING! FIASCO THEATER’S PRODUCTION OF CYMBELINE WILL CONTINUE ITS SMASHING ENGAGEMENT AT THE BARROW STREET THEATRE FOR ANOTHER TWO WEEKS THROUGH JANUARY 15.

Cymbeline, a critics’ pick just about everywhere, had been scheduled to close January 1, but surging ticket demand and a little juggling of schedules, has given the show another two weeks to entertain audiences of all ages.

“The Fiasco Company brings joyful music, playful inventiveness and just an air-kiss of irony to Shakespeare’s mock-epic. They remind us what theater, at its simplest and most powerful, is really for: the alchemical thrill of watching an entire work conjured into being out of sheer wit and will. A small masterpiece.” -Scott Brown, New York Magazine

“A playful and inspired work of art.” – The New Yorker

Click here to check out Cymbeline on WNBC TV

Regular tickets are $75.00 and may be purchased by phone at 212-868-4444; online at www.smarttix.com or in person at the Barrow Street Theatre box office, 27 Barrow Street (on the corner of Seventh Avenue, one block south of Christopher Street). The box office opens at 1:00pm daily.

Student tickets at $20 are available on the day of performance only at the box office, cash only, based on availability. For group sales, email boxoffice@barrowstreettheatre.com.

The Family Planning Package is simplicity itself: $49.50 for each adult, $25 for each child 25 and under. The package requires a minimum purchase of three tickets which must include one adult. Tickets may be purchased via 646-873-8216 or in person at the Barrow Street Theatre box office.