Emma Adler is a high school junior from New York. She is the editor in chief of her high school newspaper, and hopes to pursue a career in writing. 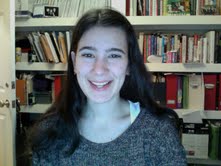 The often inexplicable twists and turns which characterize William Shakespeare’s Cymbeline have fostered a popular dismissal of the work as “unplayable.” But a production of the infamously convoluted romance at the tiny New Victory Theater is quietly undermining this oft parroted censure. Featuring a one-piece set and a grand total of six actors (the lot of them fresh out of graduate school), it just may be the best kept secret on Broadway.

Like many Shakespeare plays, Cymbeline has a relatively simple premise at the heart of its complicated plot. Imogen, the beautiful daughter of King Cymbeline of Britain, has wed the noble but lowly Posthumus, provoking the anger of her father as well as that of her thorny stepmother, whose oafish son Cloton she had been expected to marry. Posthumus is banished to Italy, while Imogen is left to languish in Britain. From here on in, mayhem ensues, and lots of it.

With its absurd plot and oftentimes wooden characters, Cymbeline inhabits a decidedly low rung on the Shakespearean food chain. So utterly imperfect is Cymbeline that a comparison of it to one of the so-called masterpieces cannot be attempted. It is no Hamlet in the same way that Ke$ha is no Maria Callas. The major pitfall which can, and often does befall companies attempting a production of Cymbeline is overestimating the material by taking the play too seriously, or allowing it to drag. The company at the New Victory Theater eludes these snares beautifully by accepting Cymbeline for what it is: the Elizabethan equivalent of good, trashy fun. The play runs at a lively and chipper pace. Dialogue is rapid; the few monologues unpunctuated by long pauses or melodramatic emphasis. The only business conducted more quickly than scene changes are character changes (blink and you’ll miss them). This speed is only occasionally problematic; clarity of some plot points is lost to swiftness, but the extraneousness and lack of bearing on the narrative of many of these tidbits suggests that this may be intentional. As the actors flit around the stage, hurtling gracefully toward the revelation laden final act, one gets the impression of watching a hectic but highly calculated dance. The spare set, consisting solely of a versatile trunk which serves as a throne, a coffin, a shelter, and a bed as occasion requires, compliments this unadorned, rapid fire style. The audience is given no opportunity to ruminate on the ludicrousness of this or that particular scene or the questionable motives of the characters. Suspended disbelief is kept aloft by the kinetic spirit which courses through the entire production.

Much of this success rests squarely on the shoulders of the cast. Due to the parity between the number of actors in the company and the number of characters in Cymbeline, a lot of multitasking goes on. All but two of the actors take on two or more substantial roles. Perhaps unsurprisingly, given the skill required to convincingly portray multiple personas in a single sitting, the more thinly spread among them deliver the richer performances. Ben Steinfeld is engaging as both the wily Iachimo, who stakes his fortune on a bet that he can woo Imogen away from Posthumus, and Aravigarius, one of two kidnapped princes who come in handy when the time comes to wrap things up. Other standouts include Paul L. Coffey, who with four roles is the busiest person on stage, and Emily Young, the scene stealer of the production whose vigor and spot on inflections dazzle in all of her incarnations (she is particularly strong as the destitute prince-napper Belaria). The weakest member of the troop is Noah Brody, who plays the male protagonist Posthumus. This is not entirely his fault. Posthumus, easily deceived and gratingly inconsistent, is perhaps the most feebly constructed of the many main characters in Cymbeline. But Brody makes little attempt to transcend these flaws by employing the selectivity necessary to create a real personality out of the disparate parts that compose Posthumus. He plays fast and loose with the role, embodying all of his attributes passionately without making an effort to reconcile them. Jessie Austrian is given much more to work with as his romantic opposite, Imogen (whom many critics of the play consider to be its one achievement), and she delivers a solid performance, if one lacking in the panache present in some of her costars’.

In an age where the most popular shows on Broadway are jukebox musicals and high cost, celebrity driven spectacles receive the lion’s share of media attention, it is refreshing to see a production that succeeds, not because it is complex or dressed up, but precisely because it is not. I wish I could say that the simple vigor of Cymbeline is prophetic of a shift in the bigger picture of popular entertainment, but the flashing lights which currently command the attention of theatergoers seem to leave little room for the less blatantly bright to shine.