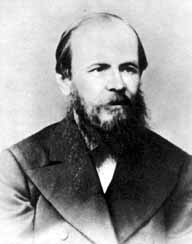 Fyodor Mikhaylovich Dostoevsky was born in Moscow on November 11, 1821 to Maria and Mikhail Dostoevsky, a retired military surgeon who practiced at Moscow Mariinsky Hospital in one of the poorest sections of the city, which included a cemetery for criminals, a lunatic asylum and an orphanage for abandoned babies. It was in this environment that Dostoevsky’s lifelong interest in the poor and oppressed was born.

Soon after his mother died in 1837, he and his brother were sent to a military engineering academy in St. Petersburg where he studied mathematics and literature. After leaving the academy in 1843, Dostoevsky began to write his own fiction, achieving acclaim at age 24 for his first short novel, Poor Folk. Much of his work thereafter was received with ambivalence.

Dostoevsky became part of a literary intellectual group, the Petrashevsky Circle, during a time of political foment. After the Revolutions of 1848 took place across Europe, underground groups in Tsarist Russia were looked upon with suspicion. In 1849, he and other members of the Petrashevsky Circle were incarcerated and sentenced to death by firing squad. At the last moment, his sentence was commuted to four years of hard labor in Siberia. Released from prison in 1854, he was required to serve in the Siberian Regiment for five years in what is now Kazakhstan. While there he married Maria Dmitrievna Isayeva in 1857. His harsh life in exile inspired him to write Memoirs from the House of the Dead (1861).

His experiences in prison and the army changed Dostoevsky’s political and religious convictions. His faith in Orthodox Christianity deepened, and he began to reject Western-influenced socialist and philosophical movements that extolled the idea of a modern utopian society, which he believed to be unobtainable.

In 1859 he returned to St. Petersburg where he ran a series of unsuccessful literary journals, including Vremya (Time) and Epokha (Epoch), the latter of which was shut down because of its coverage of the Polish Uprising of 1863. Already suffering from epilepsy and severe bouts of depression, Dostoevsky was devastated by the death of his wife in 1864, followed shortly thereafter by that of his brother. He soon completed his groundbreaking novella Notes from Underground, which became one of the most influential pieces of fiction for its socio-political ideas and deeply psychological and complex portrait of an antihero living on the margins of society. While less well-regarded in Russia, this seminal work was to influence such 20th century intellectuals and writers as Albert Camus, Jean-Paul Sartre, Ralph Ellison and Bret Easton Ellis.

Business, family and gambling debts motivated the completion of his novel Crime and Punishment in 1866, followed by a trip to Europe where he pursued his compulsion for gambling. In 1867 he married Anna Grigorevna Snitkina, a 21-year-old stenographer to whom he dictated his novel The Gambler. The Idiot (1868), The Possessed (1870) and The Dream of a Ridiculous Man (1877), followed by The Brothers Karamazov in 1880, sealed his standing as one of the great novelists in Russia’s golden age of literature.

In later years, Dostoevsky lived in a resort close to St. Petersburg. He died of a lung hemorrhage on February 9, 1881 and he was buried in St. Petersburg’s Alexander Nevsky Monastery. 40,000 mourners attended his funeral.