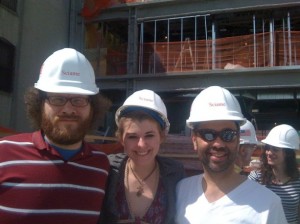 On Friday, April 20, just a day before their final weekend of sold-out performances of the New York Magazine Critic’s Pick, The Taming of the Shrew, the cast of the production visited the site of Theatre for a New Audience’s first home in the BAM Cultural District in Downtown Brooklyn.

Donning hard hats, the cast met Anthony Frontino of F.J. Sciame Construction Company. Frontino gave an overview on the current status of the construction project, and explained the specifics of the recently-installed isolation pads and slab, which will provide soundproofing and vibration isolation when the building is complete. The cast was able to explore parts of the construction site including where the stage will be when the building is completed in 2013.

It was a thrilling visit that connected our current artists with the place where they will one day perform.

Categories: All News, Our First Home, Productions, TFANA in the News