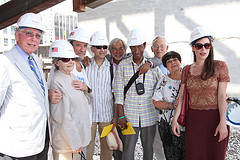 The Topping Out Ceremony celebrates the placement of the final steel beam in the building and pays tribute to the people who have literally made the building rise to this point in its construction – the steel and masonry workers who lay each beam and brick. The Theatre saluted Local 361 Ironworkers, the masons of Bricklayers and Allied Craftworkers Local 1, and all the other unions associated with construction of the building.

As is the custom, the Theatre treated the construction workers to a buffet lunch. Guests toured the inside of the building and were treated to a preview of the intimate 299-seat theatre’s interior. The Wall Street Journal reported on the Theatre in that day’s paper, and News 12 and NY1 were on site to document the celebrations.

Construction on the Theatre’s first home will be completed in the spring of 2013 and its first production, directed by Julie Taymor, will open that fall. Please click here for more great photos from the event.

Categories: Organizational News, Our First Home, TFANA in the News