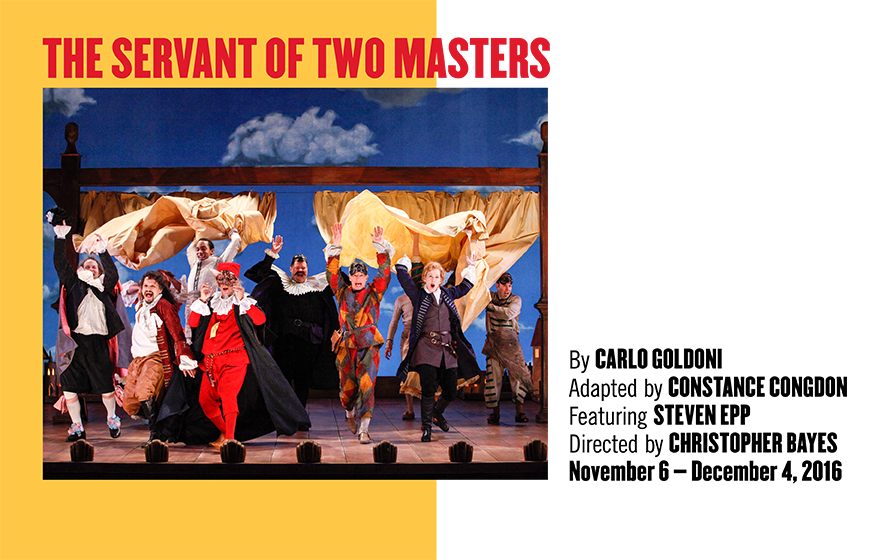 THE SERVANT OF TWO MASTERS

“Christopher Bayes’s much-lauded ‘Servant,’ had its premiere in 2010 at Yale Repertory Theater and has played across the country since then. The critic Peter Marks, in The Washington Post,
described the show as ‘deliriously happy-making,’ taking pains to note that it is not the sort of ‘calcified frivolity’ that so often gives commedia a bad name.” – Laura Collins-Hughes, The New York Times

“The Servant of Two Masters is a wondrous thing, a campy, happy romp.” – Joel Benjamin, TheaterPizzazz

“Delightful… Screamingly funny… A comic masterpiece! The Servant of Two Masters is thoroughly enjoyable and deliriously well-performed.” – The Brooklyn Paper

The Servant of Two Masters is a timeless 18th century Italian comic masterpiece by Carlo Goldoni about a servant so hungry he takes on two jobs to survive. In this contemporary American adaptation, no two performances are the same. The actors improvise along with the written text in the style of commedia dell’arte. Masks, playful costumes, and original music by Aaron Halva and Christopher Curtis create a fresh, bold, surprising event.

Theatre for a New Audience is thrilled to present the New York Premiere of this award-winning Servant, first produced in 2010 by Yale Repertory Theatre and toured nationally. Goldoni’s classic inspired the 2012 Broadway hit, One Man, Two Guvnors.

The heart of this Servant is its acting and staging. Steven Epp, who plays the title role, and director Christopher Bayes, have honed a “brilliant, new-vaudeville style” that is “smart” and “unhinged” (The New York Times). The entire cast displays fresh and vibrant comedic talents and includes TFANA veterans Liam Craig, (The Killer), Andy Grotelueschen (The Two Gentlemen of Verona, The Taming of the Shrew,Cymbeline), and Emily Young (The Two Gentlemen of Verona, Cymbeline), as well as Allen Gilmore, Eugene Ma, Orlando Pabotoy, Adina Verson, and Liz Wisan.
Run time: Approximately 2 hours and 25 minutes, with one intermission.

CLICK HERE to read the 360° Viewfinder production guide, with facts and perspectives on THE SERVANT OF TWO MASTERS