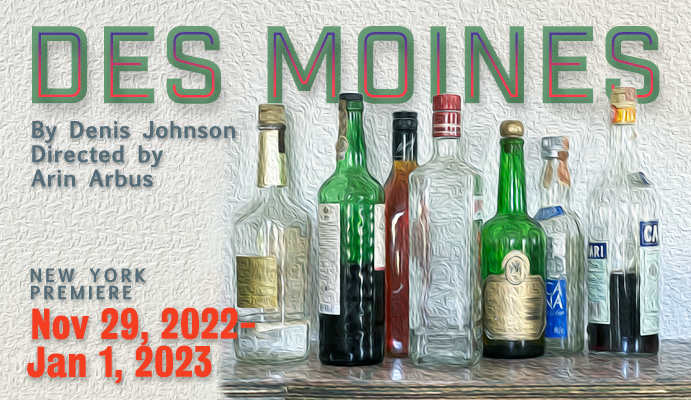 “I have a feeling God finds us pretty funny. But that’s all the speaking I should do for God—he doesn’t go around talking about me.”—Denis Johnson, New York Magazine

Des Moines, the final play by late American author Denis Johnson, is his first at TFANA. It is a sensationally mysterious work. Chance events—including a plane crash, a rescued wedding ring, a frightening diagnosis, and makeup advice kindly offered to a louche Catholic priest—bring a group of lonely and haunted characters together for a debauch that becomes an unlikely communion. Arin Arbus directs the New York premiere of this searing and tender drama about the specter of death and the stubborn pursuit of grace among those who barely believe in it.

Arin Arbus, who has staged Shakespeare and American and European Classics for TFANA, first explored Des Moines in a TFANA workshop with Johnson. She observes, “Denis Johnson was a keen and loving observer of life. He wrote about what’s holy and hilarious and hard in our daily lives and was interested in the eternal human struggle to be awake to life in an uncontrollable and incomprehensible universe.”

Denis Johnson (Playwright) is the author of nine novels, three books of verse, two short story collections, a novella, and seven plays. He received many awards and honors, including The National Book Award for Fiction (Tree of Smoke), the Library of Congress Award for American Fiction, and the Aga Khan Prize for Fiction from the Paris Review. Two of his works were adapted into a film: his book of short stories, Jesus’ Son, starring Billy Crudup and Samantha Morton, and most recently Stars at Noon, directed by Claire Denis. His plays have been produced in New York, San Francisco, Chicago, and Seattle.

Arin Arbus (Director) is a resident director at TFANA, where she directed The Winter’s Tale, The Skin of Our Teeth (Obie Award), Strindberg’s The Father and Ibsen’s Doll’s House in rep, King Lear, Much Ado About Nothing, Taming of the Shrew, Macbeth, Measure for Measure, Othello, and most recently the critically acclaimed The Merchant of Venice starring John Douglas Thompson. She directed Terrence McNally’s Frankie and Johnny in the Clair de Lune (Tony nom for best revival) with Audra McDonald and Michael Shannon on Broadway. Arbus spent several years making theatre with prisoners in association with Rehabilitation Through the Arts and in 2018, she directed an adaptation of The Tempest in a refugee camp in Greece for The Campfire Project.