“A glorious, scary reminder of the unmatched power of live theater to rattle, roil and shake us wide awake.” - The New York Times 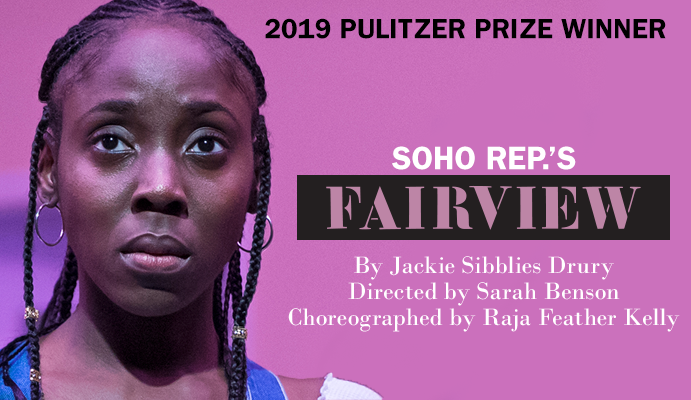 In Fairview, the Frasier family is gearing up for Grandma’s birthday, and Beverly needs this dinner to be perfect. Plus, the radio’s on the fritz, her sister Jasmine is drinking, her husband Dayton isn’t helping, her brother Tyrone might not show up at all, and her daughter Keisha is being a typical teenager. As Beverly’s hostess-neurosis begins to get the better of her while her family acts like family, Keisha’s adolescent malaise starts to seem like maybe it could be something else.

Jackie Sibblies Drury is a Brooklyn-based playwright. Her plays include Fairview (Pulitzer Prize, Susan Smith Blackburn Prize); Marys Seacole (OBIE Award);We Are Proud to Present a Presentation About the Herero of Namibia, Formerly Known as South West Africa, From the German Sudwestafrika, Between the Years 1884-1915; Really; and Social Creatures. Sibblies Drury’s plays have been presented by New York City Players and Abrons Arts Center, Soho Rep., Victory Gardens, Trinity Rep, Matrix Theatre, Woolly Mammoth, Undermain Theatre, InterAct Theatre, Actors Theatre of Louisville, Available Light, Company One and The Bush Theatre in London, among others. Her work has been developed at Sundance, The Ground Floor at Berkeley Rep, Manhattan Theatre Club, Ars Nova, A.C.T., the Soho Rep. Writer/Director Lab, New York Theatre Workshop, PRELUDE.11&14, The Civilians, The Bushwick Starr, The LARK, Magic Theatre, Bay Area Playwrights Festival and The MacDowell Colony. Sibblies Drury was a dramaturg for Futurity by César Alvarez and The Lisps; Zero Cost House by Pig Iron Theatre Company and Toshiki Okada; and The Garden by Nichole Canuso Dance Company. She received a 2015 Windham-Campbell Literary Prize in Drama, a 2012-2013 Van Lier Fellowship at New Dramatists, and was the inaugural recipient of the 2012-2014 Jerome Fellowship at The LARK. She is a NYTW Usual Suspect and a 2015 United States Artists Gracie Fellow.

*If you have subscriber questions, please email tickets@tfana.org or call the subscriber hotline at 212-229-2819 x10.