“Anyone who enjoys an original mind riffing (often hilariously) on a world classic should see Gnit.” - Ben Brantley

““Genuinely hilarious…Gnit is brainy and full of rhetorical magic.”” - The New York Times

““Will Eno’s existential comedy…is the story of a soul’s journey through life…a satire about the absurdities of self-confidence.”” - New York 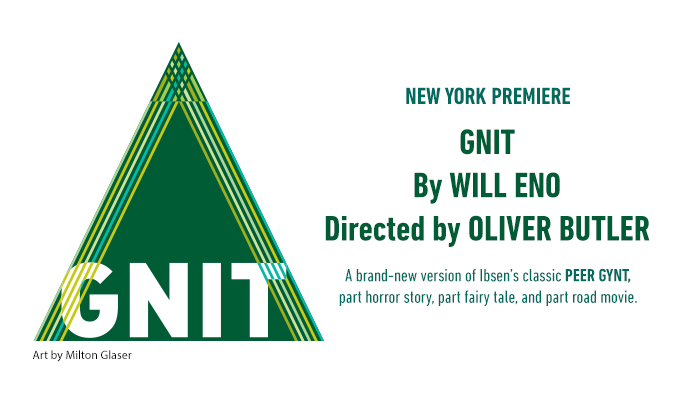 Run time: 1 hour and 50 minutes, plus one 15 minute intermission.

Peter Gnit, a modern-day version of Ibsen’s heroic character Peer Gynt, is a carefree young man on a reckless search for Experience and the True Self. Armed with tales from his mother of his early greatness and his absent father, he heads out into the world. Like all true stories of human endeavor and adventure, Gnit is part horror story, part fairy tale, and part road movie. A timely reckoning with received notions of Rugged Individualism and the self-made person. The play is performed with a 19-month break, filled with real-life tales of isolation, loss, courage, and love, and a 15-minute intermission. Come see how it all turns out.

Playwright Will Eno‘s recent plays include The Realistic Joneses (Broadway), which won a 2014 Drama Desk Award and was named USA Today’s “Best Play on Broadway.” The Paris premiere of Juste Les Jones, will be directed for the stage by documentary filmmaker Frederick Wiseman. The Open House (Signature Theater) won the 2014 Obie Award, the Lortel Award for Outstanding Play, and a Drama Desk Award, and was one of Time Magazine’s Top 10 Plays of the Year. Will wrote the book for the award-winning 2019 Skittles Commercial: the Broadway Musical.

Director Oliver Butler‘s recent productions include What The Constitution Means To Me, which won a 2019 Tony Award nomination for Best Play. He has collaborated with Will Eno on the first NYC revival of Thom Pain (Signature Theater, starring Michael C. Hall) and The Open House (Signature Theater, Lortel Best Play, Obie Award); and The Plot (Yale Rep). He is a Sundance Institute Fellow and a Bill Foeller Fellow. Oliver is co-artistic director of The Debate Society.

★★★★ “Questioned about his odd last name, the antihero of Will Eno’s Gnit shrugs and replies, “It’s a typo…but we decided to just go with it.” That no-big-deal energy is prevalent throughout Eno’s new play, whose characters grapple with the biggest of big questions—What is love? Is there a God? What is my purpose?—with almost pathological nonchalance, to both mournful and hilarious effect.

Gnit is a reworking of Henrik Ibsen’s Peer Gynt…Eno’s more substantial innovation is to substitute a deceptively breezy absurdism for Ibsen’s romantic grandiosity. Director and frequent Eno collaborator Oliver Butler has cracked the code on the playwright’s comedies of existential dread; he expertly steers Gnit’s cast of six through the twists and turns of Peter’s eventful but joyless life. The six actors play scores of characters—the quick changes are magnificent.” –Time Out NY

“Genuinely hilarious, the turns are unpredictable and the performers, especially the priceless Deborah Hedwall as Mother Gynt, Jordan Bellow as several different characters, and of course Joe Curnutte in the lead role, seem to effortlessly hit their cues…Gnit is brainy and full of rhetorical magic.” –The New York Times

“Will Eno’s existential comedy…is the story of a soul’s journey through life…a satire about the absurdities of self-confidence.” –New York

“Enophiles will delight in how snugly Ibsen’s peculiar drama accommodates Mr. Eno’s flair for playing games with language and his offbeat humor, which cuts to the heart as incisively as it tickles the funny bone.” —The New York Times (reviewing the 2013 world premiere of Gnit at Actors Theatre of Louisville, Humana Festival)

Conversation between actor John Turturro and GNIT playwright Will Eno

Conversation between director Frederick Wiseman and GNIT playwright Will Eno