REMEMBER THIS: THE LESSON OF JAN KARSKI (CLOSED)

“Lit up amid spools of fog, Strathairn’s eyes are soft and active and overwhelmed all at once... It’s a stage performance in close-up. You see it all through those eyes.” - New York Magazine

“Mr. Strathairn, under the restrained direction of Mr. Goldman, keeps us locked into the memory of the central character. We are reliving, with him, the moment-by-moment crucible of his experience.” - Wall Street Journal

“Strathairn captures Karski's inherent dignity and poise, as well as his abiding faith in goodness that somehow survived the war…the clear directive placed right in the title of 'Remember This' might be exactly what the world needs.” - TheaterMania 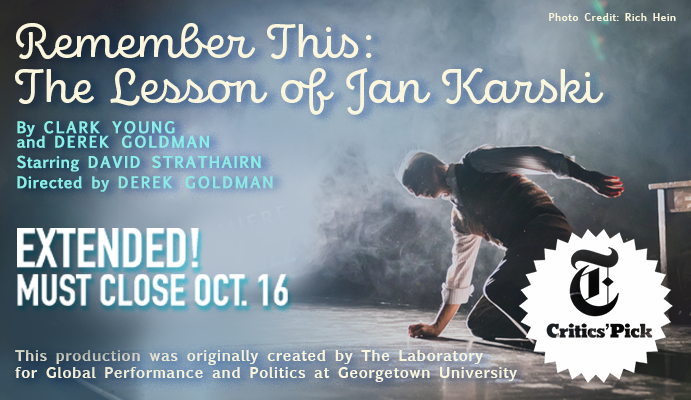 “Starring a masterly David Strathairn, and adapted from Karski’s own words by Clark Young and Derek Goldman, it brings Karski’s recollections to anguished life. With limited instruments — lights, sound, a table, two chairs, a single suit — the play evokes not only the contours of Karski’s own eventful biography, but also the horrors and privations of the war, with a particular emphasis on the failure of Allied governments to acknowledge and intervene in the murder of Europe’s Jews.
”
—Alexis Soloski, The New York Times

“David Strathairn portrays Jan Karski’s struggle to convince the Allies of the Holocaust’s enormity…Truth is the crux of Remember This. Strathairn and his moving narration tell the harrowing story.” —Peter Marks, The Washington Post

This production was originally created by The Laboratory for Global Performance and Politics at Georgetown University.

In an acclaimed solo performance, David Strathairn makes his TFANA debut portraying the Polish World War II hero and Holocaust witness Jan Karski, who risked his life to carry his report of the Warsaw ghetto from war-torn Poland to the Allied Nations and the Oval Office only to be disbelieved. Strathairn captures the remarkable life of this self-described “insignificant, little man” and his story of moral courage and individual responsibility. After premiering at Georgetown University’s Laboratory for Global Performance and Politics in 2019, Remember This: The Lesson of Jan Karski played in London at the 75th Anniversary Commemoration of the Liberation of Auschwitz; Shakespeare Theatre Company in Washington, D.C; and at Chicago Shakespeare Theater.

David Strathairn (Actor). David Strathairn’s theatre credits include: NY: The Birthday Party, CSC; Dance of Death, Salome, The Heiress, B’way;  Hapgood, Lincoln Center; A Lie of the Mind, Second Stage; Eyes for Consuela, Manhattan Theatre Club; Ashes to Ashes, Roundabout; Conversations at Tusculum, Public Theater. REGIONAL credits include: The Tempest, Scorched, Underneath the Lintel, ACT/SF; I’m Not Rappaport, Ghosts, Seattle Rep;  Remember This: The Lesson of Jan Karski, Chicago Shakespeare Theater, IMKA Theater, Warsaw Poland, Shakespeare Theatre DC.  FILM credits include:  Nomadland, Nightmare Alley, Lincoln, Good Night and Good Luck, Sneakers, A League of Their Own, Eight Men Out, Matewan, and Beyond the Call.   Since 2009 he has been a company member of Theater of War Productions.