“A new work from one of the indisputably great directors is partly a tribute to theater and partly a warning about theatricality...” - The New York Times

“It is hard to think of another theater director whose body of work has been so singular in its multiplicity. ” - The New York Times 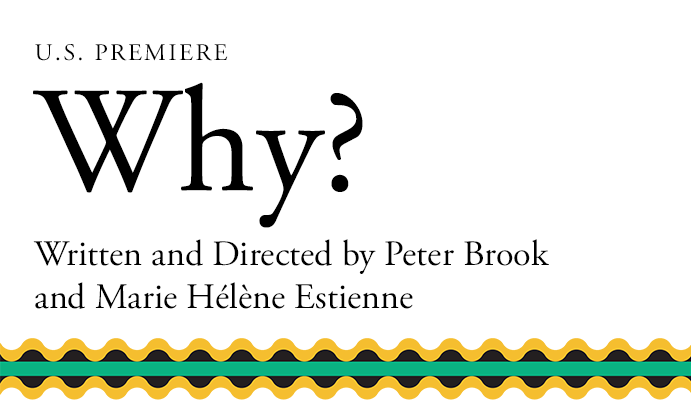 At the beginning of the 20th Century “why” and “how to do theatre“ became burning questions.

What was theatre about? How could it be more alive, more open to all? How could the actor be helped to be truer? What could be a new space? A new way of acting?
These questions and many others take us on an exploration joyful and dramatic. This is “why” we do Why?
“Theatre is a very dangerous weapon.” These words were written in the 1920s by one of the most creative, most innovative, directors the theatre has known. His name is Vsevolod Meyerhold. He saw all the menacing dangers that the theatre and art in general were going through in the 1930s in Russia. He read “the writing on the wall”, as we call it, but he did not stop. He hoped until the last minute that the Russian Revolution would win. Meyerhold paid for this with his life.
The three actors—Hayley Carmichael, Kathryn Hunter, and Marcello Magni—will unfold for us this very human story.
—Peter Brook and Marie-Hélène Estienne

Peter Brook was born in London in 1925. Throughout his career, he distinguished himself in various genres: theatre, opera, cinema and writing. He directed his first play in London in 1943. He went on to direct over 70 productions in London, Paris and New York. In 1971, he, along with with Micheline Rozan, founded the International Centre for Theatre Research in Paris and in 1974, opened its permanent base in the Bouffes du Nord Theatre. Recently, he directed The Suit (2012), The Valley of Astonishment (2014) and Battlefield (2015) – many of these performed both in French and English.

Marie-Hélène Estienne joined the CICT in 1976 – and has since never left – from press secretary to Peter Brook’s assistant, to casting, she has worked on many shows including casting the pieces. In time, she became Peter Brook’s collaborator, adapting texts, writing alone or with him, and finally participating in the staging of the shows. Their recent work includes The Suit, The Valley of Astonishment and The Prisoner.

Why? received its world premiere at C.I.C.T/Théâtre des Bouffes du Nord in Paris, France on June 19, 2019.

Why? is supported by the Trust for Mutual Understanding, the French Institute/Alliance Française, and the Cultural Services of the French Embassy in the United States.