Fragments in the New York Times 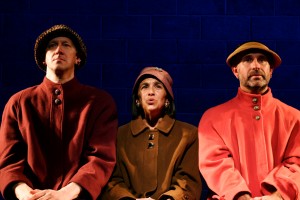 Mining Life’s Hardships for a Vein of Comedy

Laughs are always erupting, like bubbles from the depths of tar pits, in the writings of Samuel Beckett. I sometimes wonder if his reputation for annihilating pessimism owes as much to photographs of him in the winter of his life — the glowering eyes, the craggy face and the set mouth beneath a shock of hair that seemed to scream, “Egad! No more!” — as it does to his actual writing. A good production of “Waiting for Godot” is as funny as any given episode of “Curb Your Enthusiasm.” (In fact, Larry David’s vision of life may be a few shades darker than Beckett’s.)

Jos Houben and Marcello Magni in “Fragments,” an evening of works by Samuel Beckett.

“Fragments,” an evening of Beckett’s short works directed by Peter Brook and Marie-Hélène Estienne, has been compiled, according to a program note, to reaffirm the ripe vein of humor in Beckett’s vision.

“He peers into the filthy abyss of human existence,” Mr. Brook writes, but “his humor saves him and us from falling in.” Precisely.

Presented at the Baryshnikov Arts Center under the auspices of Theater for a New Audience, the program is not exactly breezy, although it lasts a mere hour. Shadows encroach upon even the lighter-spirited of the plays, but “Fragments” does cull as much vivid comic light from these mostly late works as it does existential darkness.

Originally produced at Mr. Brook’s Parisian home base, the Théâtre des Bouffes du Nord, the plays are performed by three talented actors with distinguished reputations in international theater: Jos Houben, Kathryn Hunter and Marcello Magni. And of course Mr. Brook and Beckett are a seamless match in their reverence for theatrical economy, using minimal means to maximum effect.

Mr. Houben and Mr. Magni, both original members of the English company Complicite, are paired in two pieces. In “Rough for Theater I,” which opens the program, Mr. Houben scrabbles around the plain platform on which all the plays take place, using a long stick to help roll his wheelchair to and fro. His unnamed character has lost one of his legs and approaches a blind man (Mr. Magni) begging for change with the possibility of striking up some kind of partnership.

“Do you like company?” he asks. “Do you like tinned food?” The dance of connection and disconnection between these two souls, each grown comfortable in the isolation of his existence and yet seduced by the solace of company, is both comic and sad. It is also full of Beckettian shifts in register, from the mundane to the metaphysical, as well as bits of business that have the jaunty rhythms of vaudeville routines.

“Why don’t you let yourself die?” Mr. Magni’s character dryly asks at one point.

“Act Without Words II” finds the actors employing their considerable skills as physical comics to portray men who march through their empty daily routines with diametrically opposed attitudes. For Mr. Magni’s character, it is as if every tiny act — the laborious process of dressing, taking a bite of a carrot — were a moment of torture or humiliation. Mr. Houben, by contrast, greets every moment of the journey from dawn to dusk with a goofy, naïve grin, hilariously expressing joyful abandon even in the act of combing his hair.

Ms. Hunter performs the two darkest pieces on the program, the short play “Rockaby” and “Neither,” a brief lyric originally written for the composer Morton Feldman. Mr. Brook and Ms. Estienne part ways with Beckett’s famously precise stage directions in their presentation of “Rockaby.” Beckett calls for a recorded voice for much of the monologue; Ms. Hunter performs all of it live. (They essentially dispense with the rocking chair too.)

No matter. Ms. Hunter’s delivery of this haunting, incantatory text, describing an elderly woman’s withdrawal from the world — “Time she stopped,” the character mutters time and again — into death’s enveloping embrace is utterly mesmerizing. Her grave voice, with its biting elocution and rough-woolen texture, brings us inside the dimming psyche of the protagonist with a hypnotic seductiveness that leaves a lingering chill.

There is only a hint of winter in “Come and Go,” which concludes the program on an almost frisky note. Three women, each dressed in a trim, colored coat, each wearing a pert hat, are passing the time on a bench, seated side by side. “When did we last three meet?” asks one as the play begins, a reference to the witches in “Macbeth,” of course.

One by one, each of the women rises to take a brief stroll, leaving the other two to huddle together in conspiratorial tones suggesting that the object of their discussion is suffering from some dire calamity.

“Does she not realize?” one asks.

For all the glimmers of sugar-coated schadenfreude in the women’s clipped exchanges, gently underscored by the terrific performances, the play ends on a moving, affirmative note that is far from the bleak ellipses or dark diminuendos that conclude so many of Beckett’s plays. All three women happily join hands, creating an image that movingly suggests that solitude is not the last word in human life, even in the world of Beckett.