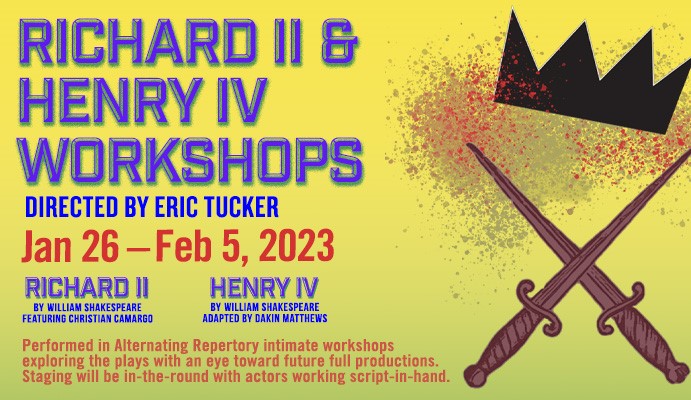 Single tickets for Richard II and Henry IV are not yet on sale.

These are intimate workshops exploring the plays with an eye toward future full productions. Staging will be in-the-round with actors working script-in-hand.

Richard II, Shakespeare’s prequel to Henry IV, is the story of the impulsive, willful, petulant, King Richard, who is deposed by the strong-willed and politically savvy Henry Bolingbroke. This powerful and popular work, written entirely in verse, is renowned for its vivid language. The play introduces questions of usurpation, legitimacy, and the divine right of kings that will launch England on the road to civil war. Richard II, featuring Christian Camargo (Coriolanus, Hamlet, and Pericles for TFANA) as Richard, alternates with Dakin Matthews’s adaptation Henry IV, a much-celebrated condensation of Shakespeare’s Henry IV, Parts 1 and 2—about Bolingbroke’s turbulent reign—into one a single three-act, three-and-a-half-hour play. This adaptation’s 2003 production at Lincoln Center’s Vivian Beaumont Theatre won multiple Tony Awards, as well as a special Drama Desk Award. Dakin Matthews and Eric Tucker are making their TFANA debuts.

Matthews writes, “There is a long tradition of combining these two plays into one, stretching back to the early 17th Century, because the first part, as glorious as it is, leaves the full story untold, and three of the four major character arcs unfinished. And though Part One is quite popular—thanks no doubt to the remarkable character of Falstaff–the chance of ever seeing Part Two is very slim for most audiences; and leaving the full story hanging deprives them of experiencing the full scope of Shakespeare’s vision. To achieve the condensation, I have interpolated crucial early scenes from Part Two into the first two acts, and then finished the third act with mostly Part Two material. In the process, some characters are eliminated or conflated, and some scenes are abridged, combined, or omitted. But the gain has been the recovery of the full sweep of history, in which Shakespeare explores what makes a good ruler and a healthy commonwealth in times of crisis and sedition.”

Eric Tucker is the artistic director of Bedlam theater company, “the adventurously lo-fi theater troupe that has earned a reputation for joyfully reinvigorating classic texts, from Hamlet and St. Joan to Sense & Sensibility and Uncle Romeo Vanya Juliet, a riff on two plays at once, Shakespeare’s youthful romantic tragedy and Chekhov’s mature and moody comedy.” (Sara Holdren, New York Magazine).

Christian Camargo (Actor) is one of today’s foremost practitioners of Shakespeare. For Theatre for a New Audience, he has played the titular roles in Coriolanus, directed by Karin Coonrod; Hamlet (OBIE Award), directed by David Esbjornson, and Pericles, directed by Trevor Nunn. Camargo became a founding company member of Shakespeare’s Globe Theater in London.  Broadway credits include: Romeo and Juliet, directed by David Leveaux; All My Sons, directed by Simon McBurney, and Skylight (Theater World Award) directed by Richard Eyre. Off- Broadway includes: The Tempest and As You Like It at BAM, directed by Sam Mendes. Camargo’s London credits include The Kid Stays in the Picture at the Royal Court, directed by Simon McBurney. Directing Credits include Days and Nights and the upcoming feature The Last Manhunt.  His film work includes: Kathryn Bigelow’s Academy Award-winning The Hurt Locker and K-19: The Widowmaker, The Twilight Saga, and National Treasure: Book of Secrets. Television includes: Errol Morris’ Wormwood (Netflix), Showtime’s Penny Dreadful and Dexter, House of Cards (Netflix), The City and the City (BBC). Camargo currently co-stars on the Apple TV series See, as the villainous “Tamacti Jun.”

Dakin Matthews (Adapter), besides being a busy actor on stage (over 250 productions including nine on Broadway) and screen (over 300 TV appearances and 30 films), is an award-winning playwright (L. A. Critics Circle Award for The Prince of L.A.), Shakespeare dramaturge (Drama Desk Award for Henry IV), and script translator (5 Walker Reid Awards for translating Spanish Golden Age plays). He is also the creator/host of TFANA’s video series “Sheltering with Shakespeare,” a teacher of Shakespeare Masterclasses around the world, a former Artistic Director of three theatres, and an Emeritus Professor of English from Cal State East Bay.