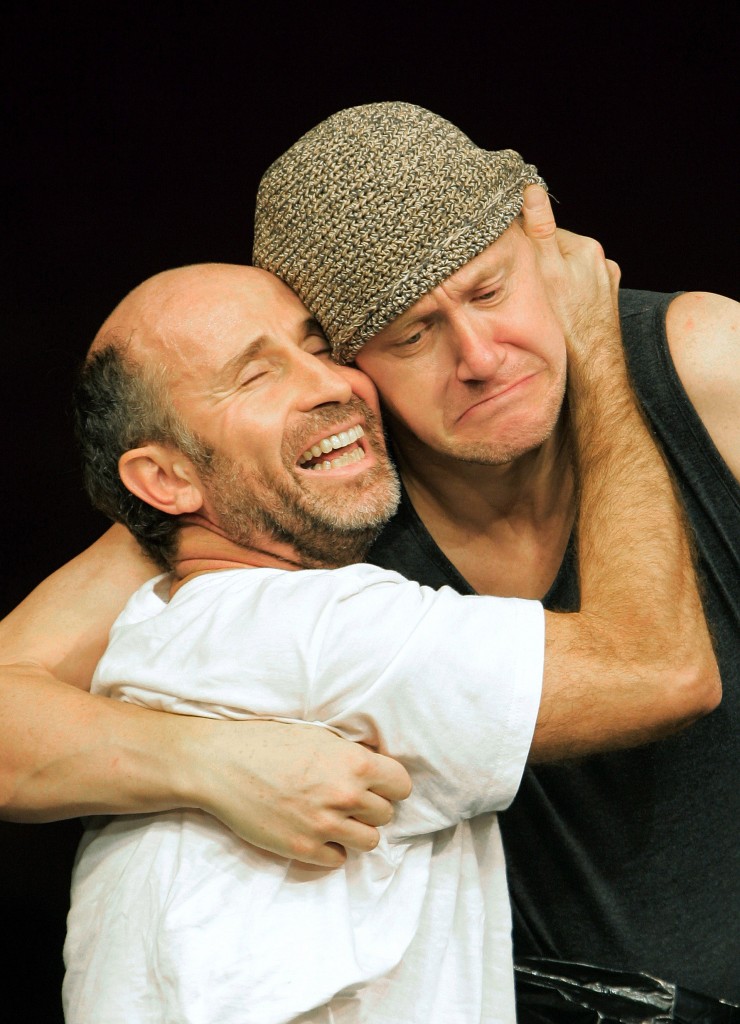 Samuel Beckett once observed late in his life that were he ever to rewrite his early plays Waiting for Godot or Endgame he “would now make them shorter.”[1]  Beckett’s writing had been spare from the beginning to be sure, but as his career progressed it also became increasingly brief.  From 1965 onward, none of his plays would run longer than eight printed pages and none would last longer than thirty minutes on stage.  Beckett took to calling many of these later works “dramaticules,” a term of his own coinage meant to connote a miniature or “miniscule” drama.  Length in these works is no longer a function of character or story; rather, brevity has become a formal goal in its own right, not a product of his writing but a mode of writing in itself.

The short plays that comprise Fragments span the length of Beckett’s writing life—from Act Without Words II in 1956 to Rockaby in 1981—yet all are marked by the same abbreviated form that would become Beckett’s late career hallmark.  Act Without Words II comprises approximately two pages of stage directions.  The dialogue in Come and Go—one of Beckett’s “dramaticules,” from 1965—runs to only two and a half pages. Rockaby in most productions takes less than fifteen minutes from start to finish.  The longest of these is Rough for Theatre I, running to about eight printed pages and certainly the most expansive in its development of the unnamed characters’ histories and personalities.  Yet the whole of the play—made up of fifty-seven lines each for characters A and B—lasts only about as long as the episode in Act 1 of Waiting for Godot where Vladimir and Estragon discuss whether they are standing at the right tree on the right day.  What was once the amount of material reserved for a single conversation in Beckett’s earliest full-length drama has become the entire substance of this short play.

For many of Beckett’s commentators, the time-span of such works is a natural outgrowth of the playwright’s famous economy and concision.  Beckett’s dramatic writing had always been notable for its pairing down to the barest linguistic essentials—what the language philosopher Stanley Cavell calls his “dexterity of the curt, stunted line.”[2]  Hence the opinion of Vivian Mercier on the short duration of Beckett’s late pieces as a product, not a cause, of his core technique. “The brevity of the later works,” he writes, “is due not to any philosophical aspiration towards silence but to this perfectionism: the only perfectly finished piece of workmanship is the miniature.”[3]  Beckett himself declared the possibility of exactitude and control within a limited frame to be one of the dramatic form’s most appealing aspects to him.  He first turned to drama after having authored several expansive and often abstract novels, thinking the genre would allow him “to create for a smaller space, one in which I had some control of where people stood or moved.”[4]  In this sense, Beckett’s short plays seem to offer a continuation and refinement of this initial appeal, the increasing terseness of his work becoming a symptom of his ever greater mastery over the minimalist’s credo to do more with less.

Yet brevity as an end in itself, and not merely as a product of a highly refined and compressed dramatic style, has a storied place in the history of modern drama.  No less a figure than August Strindberg once wondered whether the short play might even become “the formula for the drama of the future.”[5]  It was the naturalist movement in France that provided the genetic material for Beckett’s later work by creating and developing the short play in its modern form, spurred by Émile Zola’s realization that dramatic length was a convention only and that “the stage can analyze as briefly as it wishes by actions and words.”[6]  Beginning in the late nineteenth century, small Parisian theatres like the Théâtre Libre started producing plays known as quarts d’heure: fifteen-minute playlets that explored only a few simple everyday actions or a single commonplace event.  (In fact, the now-familiar phrase “slice of life” was first coined in a contemporary account of one of these naturalist quarts d’heure.)  As John Muse has written in his study of the genre, there was a powerful artistic ideology at work behind this radically short new form, a rejection of “the hypertrophied plotlines, hyperbolic exaggerations, and histrionic acting styles of the melodrama and the well-made play.”[7]  Instead of grandeur and hysterics, the new genre of short plays offered a kind of amplified intensity that could only be made possible through a deliberate conciseness.  With each play lasting only a few minutes, every detail placed on stage took on importance, each action was rendered significant.  Indeed, the guiding principle of the new short drama was taken directly from Edgar Allen Poe, whose work on the development of the modern short story was a great influence on the French naturalists: “brevity must be in direct ratio to the intensity of the intended effect.”[8]

Surely Beckett will never be confused with a naturalist, and the quarts d’heure movement had long since passed from vogue by the time he took up residence in Paris in the 1930s.  Yet the form had a lasting impact on the avant-garde theatre in France and beyond, influencing everything from the short plays of the Symbolist movement (of which Beckett is sometimes said to be a descendant) to the cabaret sketches of the Dadaists to the exceedingly brief sintesi of the Futurist playwrights.  The intensity of attention afforded by a deliberate brevity of form had been shown to be a powerful artistic tool, and it is one that would become central to Beckett’s own work.  For as much as Beckett’s short pieces display the same great economy of language that has always been one of the writer’s hallmarks, they also move, in Enoch Brater’s phrase, “beyond minimalism.”[9]  Though these plays are brisk, they are not bare: Beckett’s shorts frequently explode with a richness of detail that might otherwise be overlooked in a longer piece.  Hence, for instance, the intricacy of the everyday routines described in Acts Without Words II: the small act of taking a pill or brushing one’s teeth becomes a singular event in its own right, not merely the expendable business of a character engaged in some greater, grander drama.  Each word in Come and Go or Rough for Theatre I becomes central to our understanding of the characters and their situation as we have so little to go on and so much to understand.  While in Rockaby the simple actions of sitting and listening and speaking become the substance of a rich drama with multiple miniature “acts”—Alan Schneider, who directed the premier, once described it as a “short but full-length play, a short piece with lots of detail.”[10]

Very much because of their succinctness, these works take on an intense concentration of meaning that is perhaps more typical of poetry than of drama.  It is fitting that in Fragments, Beckett’s words for Neither—a piece written as a libretto for the composer Morton Feldman and rarely performed on its own—are included as a kind of spoken poem, a literalization of the enacted poetry that all of Beckett’s short works seek to create.  In a sense, Beckett’s shorts are not merely brief; they are an exploration of the condition of brevity—which is to say the condition of all of our lives.  Here it is the recognition of an end coming all too soon that amplifies the importance of acts and words that might otherwise seem trivial, that turns small things large, and that renders consequential that which might otherwise never be noticed.

DAVID KORNHABER is Assistant Professor of English and Comparative Literature at the University of Texas at Austin.  His work has appeared or is forthcoming in Theatre Journal, Modern Drama, Theatre Research International, and Philosophy and Literature and in the collection George Bernard Shaw in Context published by Cambridge University Press.  His journalism and theatre criticism have appeared in The New York Times, American Theatre, The Village Voice, and The New York Sun.  He is currently serving as guest editor for a special issue of Modern Drama on the topic of “Drama and Philosophy” and has previously served as Assistant Editor of Theatre Survey.  In 2012, he served on the faculty at the Mellon School of Theatre and Performance Research at Harvard University.  He is currently completing a manuscript entitled The Birth of Theatre from the Spirit of Philosophy: Friedrich Nietzsche and the Development of the Modern Drama.