By Lope de Vega
The translator/adapter of Fuente Ovejuna performed in English will be announced shortly.
Directed by Flordelino Lagundino
April 29 – May 28, 2023

“Lope de Vega’s tale of the 15th-century revolt of a small village against a tyrannical overlord is a stirring hymn to the passion of fellowship…It’s the love of a community that shines out.” —City Limits (London)

For the first time, TFANA will produce the work of the Spanish Golden Age author Lope de Vega. His masterpiece, Fuente Ovejuna (1612) is a prophetically modern drama by history’s most prolific dramatist. The play recounts a violent peasant uprising against an aristocratic lord who rapes socially powerless women with impunity and highlights the heroism of one remarkable woman who dares to lead. The heroine Laurencia’s brave stand foreshadows future movements for systemic change and individual rights.

The exciting young director Flordelino Lagundino makes his TFANA debut. The announcement of the translator/adapter of Fuente Ovejuna performed in English will be made shortly.

“We’re all of us sentenced to solitary confinement inside our own skins, for life.” —Tennessee Williams, Orpheus Descending

Tennessee Williams’ Orpheus Descending is a uniquely imaginative mix of styles. It is steamy and lyrical, a love story and a tragedy, blending realism, expressionism and poetry, and tells the story of the passion of two outcasts—Lady Torrance, a storekeeper’s wife and daughter of a murdered Sicilian bootlegger and Val, a wandering guitar player—and their doomed attempt to escape from a Southern Hell. Set in a dry-goods store in the 1950s deep South, the play’s toxic brew of racist violence, bigotry, misogyny, provincialism, and sexual passion evokes an American past that unfortunately is not the past, and that seethes with hatred, savagery, and  longing for liberation. Christopher Abbott will play Val and Maggie Siff, Lady Torrance.

Christopher Abbott (Actor). Christopher Abbott’s feature credits include: Yorgos Lanthimos’ Poor Things, Jerrod Carmichael’s On the Count of Three, Brandon Cronenberg’s Possessor, Lawrence Michael Levine’s Black Bear, Nicolas Pesce’s Piercing and Trey Shults’ It Comes at Night. Abbott was nominated for a Golden Globe Award for his work in the lead role of Hulu’s limited series Catch-22 directed by George Clooney. He was also nominated for both an Independent Spirit Award and a Gotham Award for his portrayal of the title role in Josh Mond’s James White. He is about to begin production on Swimming Home, a film adaptation of the Man Booker Prize-nominated novel by Deborah Levy. On stage, Abbott made his Broadway debut in John Guare’s The House of Blue Leaves. Other theatrical work includes The Rose Tattoo at the Williamstown Theatre Festival, Lucy Thurber’s Where We’re Born at Rattlestick Theater, Annie Baker’s John at Signature Theatre, and Sam Shepard’s Fool for Love at the Williamstown Theatre Festival.

Maggie Siff (Actor) is about to start shooting the seventh season of Showtime’s Billions (three Satellite Award nominations). She is also known for the FX series Sons of Anarchy (two Critics’ Choice Award nominations), and for playing “Rachel Menken” on the first season of AMC’s Mad Men (Screen Actors Guild Award nomination). Recent films include The Short History of the Long Road, A Woman/A Part, The Sweet Life, The Fifth Wave, One Percent More Humid, and Concussion. Siff is also an established theater actress, starring most recently in Signature Theatre’s production of Curse of the Starving Class, as well as in A Lie of the Mind at the New Group (directed by Ethan Hawke) and in Much Ado About Nothing and The Taming of the Shrew at TFANA.

Performed In Alternating Repertory by

In EXPERIMENTAL WORKSHOPS/EXPLORING THE HISTORIES, the audience will be limited to 150 per performance, seated in-the-round with direct connection to an Ensemble of Actors working script-in-hand with minimal scenery, costumes, and lighting. It will be like attending an open rehearsal in which the Ensemble is exploring and experimenting rather than giving finished performances. The audience will be part of the process. The intimacy of the setting will enable actors and audience to discover together the worlds of the plays: families, parents and children, the journey from absolute monarchy to flawed kingship and civil war.

Richard II, Shakespeare’s prequel to Henry IV,  featuring Christian Camargo as King Richard and Thomas Jay Ryan as Henry Bolingbroke, is the story of a vain King Richard, ordained by god, who is deposed by the strong-willed and politically savvy Henry Bolingbroke. This powerful work, written entirely in verse, is renowned for its extraordinary  language and exploration of usurpation, legitimacy, and the divine right of kings.

Matthews writes, “There is a long tradition of combining these two plays into one, stretching back to the early 17th Century, because the first part, as glorious as it is, leaves the full story untold, and three of the four major character arcs unfinished. And though Part One is quite popular—thanks no doubt to the remarkable character of Falstaff—the chance of ever seeing Part Two is very slim for most audiences; and leaving the full story hanging deprives them of experiencing the full scope of Shakespeare’s vision. To achieve the condensation, I have interpolated crucial early scenes from Part Two into the first two acts, and then finished the third act with mostly Part Two material. In the process, some characters are eliminated or conflated, and some scenes are abridged, combined, or omitted. But the gain has been the recovery of the full sweep of history, in which Shakespeare explores what makes a good ruler and a healthy commonwealth in times of crisis and sedition.”

Eric Tucker is the artistic director of Bedlam theater company, “the adventurously lo-fi theater troupe that has earned a reputation for joyfully reinvigorating classic texts, from Hamlet and St. Joan to Sense & Sensibility and Uncle Romeo Vanya Juliet, a riff on two plays at once, Shakespeare’s youthful romantic tragedy and Chekhov’s mature and moody comedy.” (Sara Holdren, New York Magazine).

Remember This: The Lesson of Jan Karski

This production was originally created by The Laboratory for Global Performance and Politics at Georgetown University.

“David Strathairn portrays Jan Karski’s struggle to convince the Allies of the Holocaust’s enormity…Truth is the crux of Remember This. Strathairn and his moving narration tell the harrowing story.” —Peter Marks, The Washington Post

In an acclaimed solo performance, David Strathairn makes his TFANA debut portraying the Polish World War II hero and Holocaust witness Jan Karski, who risked his life to carry his report of the Warsaw ghetto from war-torn Poland to the Allied Nations and the Oval Office only to be disbelieved. Strathairn captures the remarkable life of this self-described “insignificant, little man” and his story of moral courage and individual responsibility. After premiering at Georgetown University’s Laboratory for Global Performance and Politics in 2019, Remember This: The Lesson of Jan Karski played in London at the 75th Anniversary Commemoration of the Liberation of Auschwitz; Shakespeare Theatre Company in Washington, D.C; and at Chicago Shakespeare Theater.

David Strathairn (Actor). David Strathairn’s theatre credits include: NY: The Birthday Party, CSC; Dance of Death, Salome, The Heiress, B’way;  Hapgood, Lincoln Center; A Lie of the Mind, Second Stage; Eyes for Consuela, Manhattan Theatre Club; Ashes to Ashes, Roundabout; Conversations at Tusculum, Public Theater. REGIONAL credits include: The Tempest, Scorched, Underneath the Lintel, ACT/SF; I’m Not Rappaport, Ghosts, Seattle Rep;  Remember This: The Lesson of Jan Karski, Chicago Shakespeare Theater, IMKA Theater, Warsaw Poland, Shakespeare Theatre DC. FILM credits include:  Nomadland, Nightmare Alley, Lincoln, Good Night and Good Luck, Sneakers, A League of Their Own, Eight Men Out, Matewan, and Beyond the Call. Since 2009 he has been a company member of Theater of War Productions.

“I have a feeling God finds us pretty funny. But that’s all the speaking I should do for God—he doesn’t go around talking about me.” —Denis Johnson, New York Magazine

In a seedy apartment on the edge of Des Moines, an unlikely assortment of people come together for an impromptu party that takes them, by the evening’s end, on a dam bursting ride down a stream-of-consciousness deluge. Downing depth chargers and singing karaoke, they struggle with the strange and unholy trinity of life, death, and sex in this work filled with dark humor and mystery. “What I write about,” Johnson observed, “Is the dilemma of living in a fallen world and asking why it is like this if there’s supposed to be a God.”

Michiko Kakutani in her 2017 Appraisal of Denis Johnson in The New York Times observed, “He used his startling gift for language to create word pictures as detailed and visionary, and as varied, as paintings by Edward Hopper and Hieronymus Bosch, capturing the lives of outsiders — the lost, the dispossessed, the damned — with empathy and unsparing candor…There is a fierce, ecstatic quality to Mr. Johnson’s strongest work that lends his characters and their stories an epic, almost mythic dimension, in the best American tradition of Melville and Whitman.”

Denis Johnson (Playwright) is the author of nine novels, three books of verse, two short story collections, a novella, and seven plays. He received many awards and honors, including The National Book Award for Fiction (Tree of Smoke), the Library of Congress Award for American Fiction, and the Aga Khan Prize for Fiction from the Paris Review. In 2014, Denis Johnson was inducted into the American Academy of Arts and Letters. Two of his works were adapted into a film: his book of short stories, Jesus’ Son, starring Billy Crudup and Samantha Morton, and most recently Stars at Noon, directed by Claire Denis. His plays have been produced in New York, San Francisco, Chicago, and Seattle.

Arin Arbus (Director) is the Resident Director at TFANA, where she most recently directed the critically acclaimed The Merchant of Venice starring John Douglas Thompson. On Broadway, she directed Terrence McNally’s Frankie and Johnny in the Clair de Lune (Tony nom for best revival) starring Audra McDonald and Michael Shannon.

All of the above productions offer free complementary humanities programming exploring the language and ideas of the authors and productions.
TFANA Talks: post-performance conversations with artists and thinkers that take place during the run of each production.
360 Viewfinder: an online publication exploring each production. 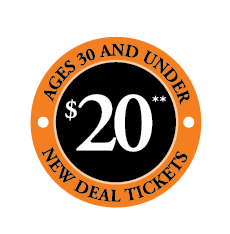 TFANA will also continue its popular New Deal Program, which offers $20 tickets for the best available seats at all performances for all productions, for those age 30 and under or full-time students of any age. (Proof of age or full-time student status required.) Click here to learn more.

*All New Deal ticket holders must be 30 years of age and under or full-time students. ID required for pick up.
All productions, artists, and dates are subject to change. 22-23 Subscriptions are non-refundable, subject to change, and valid only for the 22-23 Season.

Endowment support for Fuente Ovejuna is provided by The Howard Gilman Foundation Fund for Classic Drama.