He Brought Her Heart Back in a Box 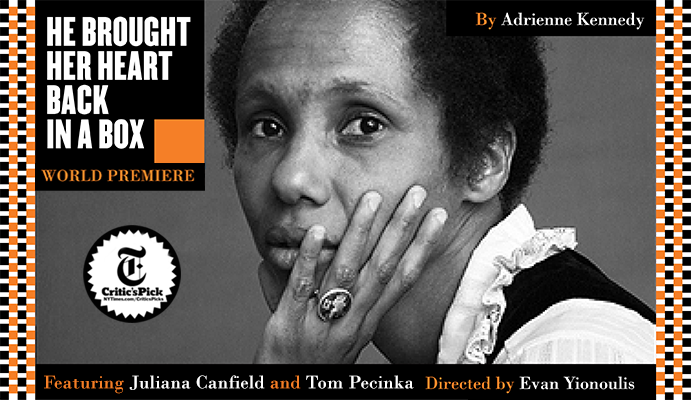 HE BROUGHT HER HEART BACK IN A BOX

Set in Georgia and New York City in 1941 this heartbreaking memory tale of segregation and doomed love braids together Jim Crow, sexual hypocrisy, and the lingering shadow of a terrible crime. The world premiere of her first new play in a decade is directed by Evan Yionoulis who staged the award-winning TFANA production of Kennedy’s Ohio State Murders.

“He Brought Her Heart Back in a Box. Now there’s an evocative title for you, conjuring dread, romance and a tragic surrealism all at once. Such is the distinctively poetic and terrifying universe of Adrienne Kennedy.” – Ben Brantley, The New York Times, 5 Shows to See if You’re in New York in January

“[He Brought Her Heart Back in a Box is] the first new play in ten years by the great Adrienne Kennedy, a formative voice in modern African-American drama and the playwright of Funnyhouse of a Negro. Evan Yionoulis directs the new piece, an expansive, heartbreaking memory play set in Georgia and New York in 1941, stretching from Jim Crow to Christopher Marlowe in its exploration of segregation, doomed love, hypocrisy, and desire.” – Sarah Holdren, NY Mag/Vulture, 23 Exciting Productions Taking the Stage in 2018

“Ms. Kennedy is one of the American theater’s greatest and least compromising experimentalists. Her dramas are sites of living history, where personal stories of racism’s unhealed wounds mingle with dark tales thieved from the Brothers Grimm and 1940s Hollywood.” – Alexis Soloski, The New York Times

“Adrienne Kennedy brought to life the depths of black female interiority and the aching humanity of black womanhood.” – Daphne Brooks, Professor of Theater and African-American studies at Yale University as quoted in New York Times

PANEL DISCUSSION:
On Saturday, January 20 at 8:30pm where Pulitzer-Prize winning author and critic Margo Jefferson will lead a discussion with director Charlotte Braithwaite, and playwrights Lydia Diamond and Jackie Sibblies Drury. Each of the artists will speak about Adrienne Kennedy’s legacy and their unique relationship to her work. Click here to learn more and RSVP.
TFANA TALKS:
Join us for our free post-show conversations with artists and scholars that will take place after the
Saturday matinee performances on February 03 and February 10.
POST-SHOW PARTIES:
Join us for a party after the evening performance on Sunday, January 21.
Every ticket purchased to that evening performance includes a drink ticket for use at the party.

360° Viewfinder: HE BROUGHT HER HEART BACK IN A BOX

First Rehearsal: HE BROUGHT HER HEART BACK IN A BOX