FEFU AND HER FRIENDS

“This is not experimentalism as difficulty: It’s pleasure after pleasure. ” - Vulture

“This revival from director Lileana Blain-Cruz is nothing short of exquisite.” - Time Out NY

“A key work of the American avant-garde, directed by Lileana Blain-Cruz, is the first major revival to appear here since 1978. And a good revival it is.” - The New York Times

“This revival, directed festively, and with menace, by Lileana Blain-Cruz, for Theatre for a New Audience, takes the danger of that moment and spreads it out, making it permeate the whole haunted-feeling show.” - The New Yorker

“Four decades after it debuted, Fefu still hits us like a shot between the eyes.” - Theatermania

“In the work of every American playwright at the end of the 20th century, there are only two stages: before she has read Maria Irene Fornes and after.” - Paula Vogel

“A testament to Fornés' influence is the wide range of artists who openly acknowledge her impact...” - Caridad Svich

“Irene is in the pantheon of the great writers like Beckett or Pinter or Caryl Churchill.” - Joanne Akailitis in The New York Times 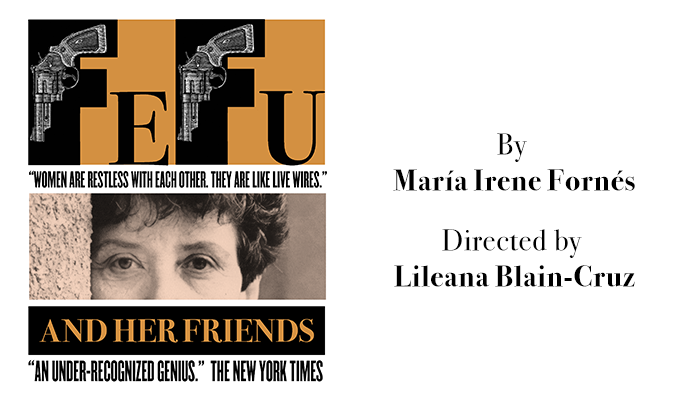 María Irene Fornés has been called the greatest and least-known dramatist of our time. Signature Theatre devoted its 1999–2000 season to her work. She’s written over 40 “spare, poetic, and emotionally forceful works”; won nine OBIE awards; and her epic What of the Night? was a finalist for the 1990 Pulitzer Prize. JoAnne Akalaitis, Edward Albee Caryl Churchill, Migdalia Cruz, John Guare, Tony Kushner, Eduardo Machado, Caridad Svich, Paula Vogel are among the artists that have credited her as an inspiration and influence.

Fefu and Her Friends is “funny and shocking…the dramatic equivalent of a collection of poems… Seven friends gather at Fefu’s house for a kind of reunion… exploring lives and quite specifically the pain, strain, comforts, and fragility of women’s lives… After the initial scene in the living room, we are divided into four groups and visit the kitchen, a bedroom, and a garden in each of which some particular encounter takes place… The actors perform the same thing four times so that we all have a chance to see them… An engaging kind of activity… There are moments of splendor.” —Richard Eder, reviewing the original 1978 production, The New York Times

Run Time: 2 hours with no intermission.

In Part 2, as intended by the author, the audience will leave their assigned seats and move to other locations in the theatre to experience four scenes. Each of the four scenes run approximately 9 minutes. In three of the four scenes patrons with “seated” tickets will sit in chairs. In one scene all patrons will stand or sit on cushions on the floor. House staff will be available to assist patrons at all locations.

Please see the Seating Chart for more information. Do not hesitate to call us if you have questions about accessible seating or other concerns: 212.229.2819 x10