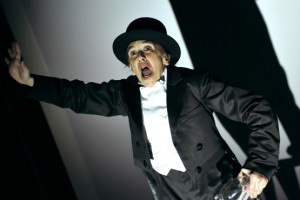 To say that humans are descended from apes is, taking the phrase literally, to imply that we have fallen from a higher state. In gaining speech, bigger brains and a will to shape the world, we’ve lost our purer, natural selves. This essentially Romantic notion gets a harsh, modernist spin in Franz Kafka’s 1917 story “A Report to an Academy,” in which the simian Red Peter—who has learned to speak and imitate the ways of Homo sapiens—recounts his transformation to a gathering of scientists. The remarkable English actor Kathryn Hunter takes on this bizarre role in Kafka’s Monkey, a blackly humorous monologue adapted by Colin Teevan.”

To read the rest of the review, click here.