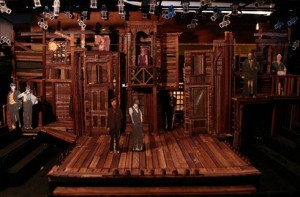 Set model for The Taming of the Shrew, designed by Donyale Werle. For more production photos, click here.

If you saw our production of The Taming of the Shrew this spring, you likely noticed the beauty of the warm, wooden, Wild West-style set, designed by Donyale Werle. The set was realized by Paper Mâché Monkey, a newly founded, New York-based art studio specializing in sustainable design and the green fabrication of hand-made sculptures, art objects, and theatrical scenery and props.

The studio debuted their work in 2011 with the creation all of the handcrafted set dressing and props for Bloody Bloody Andrew Jackson on Broadway. Founders Kenneth Grady Barker and Meghan Buchanan answer questions from the Theatre’s Education and Humanities Department. This article also appears in The Taming of the Shrew’s 360⁰ Viewfinder.

Q:           You describe Paper Mâché Monkey “as a creative team, [priding] itself on being comprised of multi-disciplined designers and sculptors in their own right.” Is there a line between the arts of set design, sculpture, and set building? If so, where is that line?

A:            For many companies, I think there is a much more distinct line than the ones we have created for ourselves at Paper Mâché Monkey. We are each artists and designers in our own right, and we try to take on projects in which we are not only building something, but also contributing a thoughtful aesthetic expertise. I don’t think there is necessarily a line, but really a marriage of sculpture, fabrication, and the art of set design.

Q:           Donyale Werle has described her process as collaborative and a “team-based approach.”  How would you describe your collaboration with her? Especially with respect to the Shrew set?

A:            We have had the opportunity to work on several shows with Donyale, and have really developed an understanding working together. Her designs have a specific direction, but are also open to interpretation. We respect what she has put on the table, and she acknowledges that we are not only builders, but artists that are able and willing to enhance her design. Everyone’s ideas count in this process (and we hire people who have equally great ideas). For us, it’s a very liberating and truly collaborative process.

A:            We have had a lot of conversations regarding sustainability. As we all know, the theater is an inherently wasteful industry. Shows are built out of entirely new materials, installed, performed on, and dumped in the trash sometimes in a matter of weeks. Though convenient for a show’s quick turn-over in a theater, this practice is not good for the environment.  Large amounts of perfectly good materials go to waste constantly, especially in an urban area as big as New York City. Finding and re-purposing those waste materials to create new sets and props is just one step that we can take toward a greener theater. To us, sustainability is thoughtful resourcefulness.

Q:           Where did Shrew’s set’s salvaged wood come from? Were there any other materials salvaged for the project?

A:            The wood in our show came from a number of places. Build It Green and Materials for the Arts are a couple of our “go to” resources for doors, lumber, paint, and fabrics.  We have also established a relationship with a company that recycles the wood from used shipping pallets to create new ones for sale. We were able to talk them out of some of their lumber prior to manufacturing. We claimed and re-purposed 14 theatrical flats and several jacks from a movie set that had wrapped up production a couple weeks ago.  We received an email that the entire set was all headed for the trash, so we hopped in a truck and went to pick it up. This is often times how it works when a large community knows that you are working in a recycled sustainable way:  it is more or less organized scavenging.

Q:           Considering the many fire and building codes and safety requirements are involved in building a set, have you found that using recycled or salvaged materials means that the actual building process is more labor intensive? Especially considering that the Shrew set is mostly wood?

A:            Building codes, fire codes, and actor safety are some of our utmost concerns. Using re-purposed materials means we are paying much closer attention to the condition of the materials prior to use than if we were buying new lumber. While recycled materials often times are much cheaper than buying new, the time spent processing the materials (sanding wood down and picking out old staples) is significant.  The budget, in that regard, is reallocated away from the new material costs to an investment into human labor, which we as a studio feel much more proud to support as an ongoing resource.

A:            This is an on-going question.  There is a giant network in New York of people looking for materials to reuse and recycle into new things.  As a studio, we try to take back what we can to reuse materials into other projects.  We list items on group forums and contact others who feel might benefit from our sets.  Many of the props are on loan from other theaters, and will go back into their rightful owners who generously let us borrow them.  As a whole, we make an effort to find a new home for as many of the materials as we can, in order to save them from being thrown out completely.

Meghan Buchanan has spent a significant time working in the downtown theater scene, creating 5 years worth of props and costumes for Richard Foreman’s Ontological Hysteric Theater. Her shows at the OHT include Zomboid, Wake Up Mr. Sleepy Your Unconscious Mind is Dead, Deep Trance Behavior in Potatoland, Astronome: A Night at the Opera, and Idiot Savant (props only.) Meghan has served as Prop Designer/Prop Master for the Actors Studio at Pace University, Williamstown Theater Festival, New York Theater Workshop, The Roundabout Underground, Primary Stages, Classic Stage, as well as the 40th Anniversary Concert production of Hair, and Jollyship the Whizbang at Ars Nova. Meghan designed the set for the NYMF production of Rainbow Around the Sun, and the costumes for the Paper Industry’s Sine Wave Goodbye. She received her BFA in Scenic and Costume Design from the University of Oklahoma.