Announcing the Council of Scholars 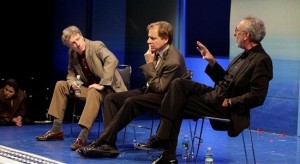 Theatre for a New Audience is establishing a Council of Scholars to expand the scope and depth of the Theatre’s humanities programs. The Council will have a fundamental role in advising the Theatre’s artistic and education leadership as it completes its Center for Shakespeare and classic drama as its first home in Downtown Brooklyn’s BAM Cultural District.

Theatre for a New Audience’s Humanities programming receives support from the National Endowment for the Humanities.