Kafka’s Monkey in The New Yorker 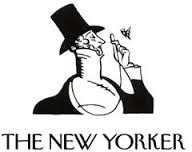 “An ape headed from Africa to Europe on a steamer at the turn of the twentieth century seduces his captors by making a spectacle of drinking their booze, then teaches himself how to talk, walk, and think like a man. Or so he tells esteemed members of “the academy” years later, when, having almost fully morphed into a human being—bowler hat, tails, and all—he is giving a lecture on his profound transformation. It is shocking how completely the London-based actress Kathryn Hunter has managed to physically embody this ape turned man. Under the direction of Walter Meierjohann, Hunter also gets across the rage at the bestiality of mankind that Kafka captured in “A Report to an Academy,” the short story on which Colin Teevan’s delicious adaptation is based.”