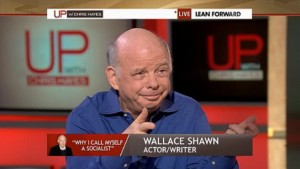 Wallace Shawn on MSNBC's "Up with Chris Hayes"

Earlier this February, MSNBC’s Chris Hayes interviewed Wallace Shawn on his weekend show, “Up with Chris Hayes.” In this segment, Shawn reads from his play The Fever, and joins a panel discussion about privilege, global capitalism and other political themes which permeate his essays and plays.  To view this segment on MSNBC’s website, click the photo (left).

Read more about the Wallce Shawn/André  Gregory Project in The New York Times and on Gothamist.