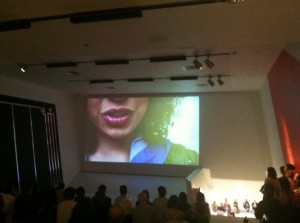 Sonnet #8, featuring Michelle Beck, is screened at the Museum of the Moving Image

The New York Shakespeare Exchange (NYSX) is a New York-based theatre organization that combines Shakespearean text with contemporary themes and urban settings.  They offer a variety of programs that are not only accessible but also a lot of fun.  One of these programs, “The Sonnet Project,” is ambitious theatre venture that involves film and theatre directors, actors, and storytelling through film. For the entire year leading up to Shakespeare’s 450th birthday, NYSX will release  internet videos of all 154 sonnets, performed by 154 different actors in 154 unique locations throughout the five boroughs of New York City. The culmination of the project will be marked by the release of a full Sonnet Project Anthology, plus an app for iphone, ipad, and android (Salon.com’s app of the week). The anthology will be complete with special features exploring the textual nuances of the language, behind-the-scenes footage and interviews with the creators and actors.

Sonnet number 8, which was released last Saturday, stars Michelle Beck, who was recently seen as “Hero” in Arin Arbus’s Much Ado About Nothing. One of the directors, Emily Ernst, is also on staff at Theatre for a New Audience. Recently, we contacted Ross Williams, Producing Artistic Director, to ask him about what inspired him to create the NYSX, what he sees for the future of the Exchange, and about some of the programs they offer.

What gave you the idea to create the New York Shakespeare Exchange? I got really tired of hearing people saying things like “I don’t like Shakespeare” or, “Shakespeare’s boring” or, “I don’t understand Shakespeare.”  Shakespeare wrote for the common man.  His work is full of primal and visceral experiences.  If audiences are not connecting to those elements of the plays, then we as artists are doing something wrong.  I decided I wanted to dig into how Shakespeare intersects with today’s culture and find new audiences for the work. To do that I had to ask some big questions:  What are the commonalities between us and Shakespeare’s plays?  How do we rediscover the immediacy that was present in the Globe?  How do we find relevance for poetic text in a digital world?  How do we get people to include Shakespeare in their world when there are so many other options and distractions?  All these things led me to create NYSX.  I think a lot of companies focus on building new audiences in communities that have never had access to the work.  That’s definitely a part of my goal, but NYSX also works to bring Shakespeare into focus for audiences who have witnessed the work but never fully experienced it. If we can find a way to put Shakespearean performance back into the mainstream, then the work will spread to the untouched corners of the world.  But we have to start with making the plays matter again.

What is important about the word, “exchange?” Everything in art should be a conversation. There has to be an exchange of energy or thought. There are 3 places where this conversation becomes primary for NYSX:  1) The exchange of energy between the audience and a performance; 2) the conversation between today’s world and the world in which Shakespeare wrote; and, 3) the ever-changing dialogue between our artists and the world in which we live.

Walk us through the Sonnet Project process from application, to finished product. How does it work? How do you find directors?  We have a page in our website that is the text of all 154 sonnets.  If a sonnet is still available, then a director can click on it and be taken to the submission form.  There, the director will learn about the creative parameters that govern this project.  If they like what they see and feel like they can create something glorious then they submit themselves for consideration.  We vet the directors based on their resume and work samples.  Once a director is chosen for the project, NYSX assigns the location and the actor.  The director combines these new elements with the language of the sonnet to create their concept.  The whole team then works with an NYSX text coach to ensure rhetorical clarity and to encourage good use of language and imagery.  Finally, the whole crew heads out for a one-day film shoot.  Once the footage is edited, the director submits it to us.  All told, the process is relatively quick.  Usually a few hours of rehearsal, a day of filming and a few days of editing.

What gave you the idea for the sonnet project?  I want more people to have Shakespeare in their lives.  I thought that if we could deliver Shakespeare directly to our audience in easily digestible bits we might get people to listen.  The sonnets are a natural fit because 2-3 minutes every couple of days is fairly achievable – even for the most Shakespeare-averse among us.  And if we get people hearing the language more regularly, we might combat some of the stigma that people carry with them from less successful experiences of the Bard.  Ultimately, if we make Shakespeare as a regular part of people’s lives, then they might be that much more inclined to buy a ticket to a summer Shakespeare festival, or even a community theater production of Romeo & Juliet.

What did you learn about working on sonnets?  I viewed them as poems that actors played with in their first Shakespeare class – sort of introductory pieces.  I had never really explored them as something worth sharing.  But the deeper I get into them, the more beautiful they become.  The language is so intensely layered and the imagery is astounding.  And then, once you start reading them in sequence they really come to life.  The arc through the whole series is so specific and yet so open to personal interpretation.  I have really fallen in love with them.

How do you choose the location for each sonnet?  We started by finding about 200 locations of note in the 5 boroughs.  The big monuments like the Statue of Liberty were fairly obvious, but for the more ephemeral locations we had to do a lot of research on forgotten New York.  We also looked at iconic locations from movies and television.  Once that list was determined, I looked at the imagery and “story” of each sonnet and paired them with their location. Some are fairly obvious connections (floral imagery = a garden; nautical imagery = a wharf), but some are more obscure.  I am curious to see if our audiences will find all the connections.

You have an event called “ShakesBEER” which takes place in multiple bars throughout Manhattan and performs pieces from a variety of Shakespeare plays.  What is the experience like?  In each bar, the performance erupts in the middle of the crowd. You may very well have Hamlet standing on your table and calling across the crowd to his Ophelia. We’ve found that it is some of the most immediate Shakespeare our actors and audiences have ever been a part of.  I like to think that it’s the closest thing we have to what the groundlings experienced at the Globe.  When a Shakespearean aside is said in most contemporary productions there is a sense of direct address to the audience, but not really a true exchange.  At ShakesBEER, when a character makes an off-color joke, he may be hanging on the shoulder of the nearest spectator and literally speaking directly to him.  This creates a sense of community for the performance. The entire audience feels free to catcall and hoot and holler. Things get fairly raucous by the fourth bar.

What are you favorite Shakespeare plays, and what draws you to them?  For me, the plays resonate so differently depending on what’s going on in my life. That variability is actually one of my favorite things about Shakespeare’s work.  I’m currently drawn to the underdogs.  The plays that don’t get done very often.  King John is one of my all-time favorites, and right now I can’t get enough of Titus Andronicus.  I also love Hamlet and The Tempest, but right now they are not speaking to me as they have in the past.  I have a feeling they will come back to the head of the line in due time.

What’s next for NYSX?   June 22-26 we are sharing a workshop version of Pericles at the Gene Frankel Theater. It’s the biggest theatrical experiment we’ve ever embarked on.  We brought together a group of seven actors and built the show starting from ensemble acting techniques.  In the summer we’re doing “ShakesBEER in the Boroughs” in Brooklyn and Queens, TBD.  And in the fall we are mounting a full production of Othello at the Hudson Guild Theater in Chelsea.  Find out all about our projects at www.ShakespeareExchange.org. To apply to direct one of the remaining sonnets, apply here.

Categories: All News, TFANA in the News, Uncategorized